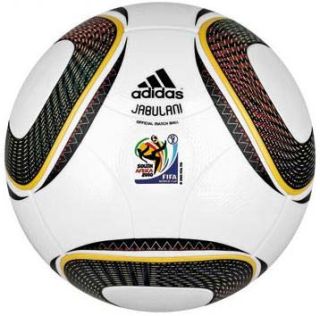 The Jabulani soccer ball by Adidas, new for the World Cup 2010 in Johannesburg, South Africa. The ball has different aerodynamic effects than previous balls.
(Image: © NASA/FIFA/Adidas)

World Cup players might notice some strange things happening to their kicks because of the peculiar aerodynamics of playing soccer at the high altitude of the Johannesburg, South Africa, stadium, a NASA scientist warned today.

At altitude, the air pressure is lower, and so are aerodynamic effects such as drag and lift, ultimately causing balls to travel faster and straighter than they would at lower altitude. Johannesburg is 5,500 feet (1,680 meters) above sea level, even higher than Denver.

"When they play there, the ball will behave differently because of air density compared to other stadiums," said Rabi Mehta, an aerospace engineer at NASA Ames Research Center in Moffett Field, Calif. "When watching the games recently, you often see long passes that overshoot, and I think that's because of this effect."

Physics on the field

Drag is the force of air resistance pushing against a ball's motion and slowing it down, while lift is a force causing a ball to swerve off a straight path. Both forces are caused by the presence of air, so with less air molecules around, these forces are reduced. Thus, the same kick in Johannesburg compared with one at sea level would cause a soccer ball to travel faster and on a less curved path.

Players who are aware of altitude's effect on aerodynamics could have an advantage over those who don't, Mehta said.

"If they understand what happens in certain situations, that improves their performance," Mehta told LiveScience. "When the person is producing a pass he has to realize, 'I need to kick it not as hard as I would at sea level, otherwise it's going to go out of bounds.'"

In addition, the altitude can be tough physiologically for players not used to it. Less atmosphere means less oxygen to breathe, which causes a strain on athletes as they must breathe harder to get enough oxygen to their straining muscles. People can adjust to altitude, and their bodies will begin producing more red blood cells to take advantage of the oxygen that is available. But this takes time, so players who live at high altitude or arrive early enough to acclimatize have a definite advantage.

Mehta also did some research on the aerodynamics of the new soccer ball being used at the 2010 World Cup. For the competition Adidas introduced a new ball called Jabulani (Zulu for "celebration"). The new model is made out of eight panels, compared with the previous 14, and has special aerodynamic ridges on its surface.

The ball is an adjustment to a previous new ball called Teamgeist, introduced for the last World Cup in 2006. At the time, Adidas said it was the world's most accurate soccer ball, though players complained it didn't perform as they were used to.

Mehta said Jabulani will probably have some of the same quirks as Teamgeist.

A primary issue is what's called "knuckle-balling." A knuckle ball is a ball that swerves or veers in unexpected directions. This happens because the ball is kicked straight, without spin.

Ironically, that lack of spin on the ball causes its path to curve because of aerodynamics. The ball is not perfectly smooth because of the seams between its panels, and now because of the added ridges. These irregularities cause an asymmetric flow of air around the ball, creating side forces that push the ball into a swerve.

The new ridges and overall design make Jabulani even easier to knuckle-ball at the speeds commonly kicked at during free-kick around the goal area.

Knuckle-balling is not necessarily bad – sometimes it helps throw the goalie off if a ball swoops at the last minute. But players like being able to anticipate where their kick will land, and the new ball will take some adjustment, Mehta said.

Mehta shared some of these findings with a group of students who were invited to test out the new ball at an event held by NASA Ames's Fluid Mechanics Laboratory.

"It's amazing how kids get excited when you start talking about sports," Mehta said. "All these efforts are meant to get kids more interested in science and engineering."