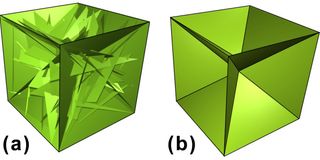 Computer simulations of 3-D solar panels. The one on the left consists of 64 flat, triangular, double-sided panels; the one on the right is a simplified version.
(Image: © Jeffrey Grossman et al.)

Solar panels nowadays are flat, but folding them in origami-like ways could help dramatically boost the amount of power they could generate, scientists say.

Research into solar or photovoltaic panels thus far have kept them flat largely to prevent them from casting any shadows that might diminish the amount of light they could harvest. Two-dimensional panels are also far easier to install on rooftops and are well suited to standard large-scale fabrication techniques.

Still, three-dimensional solar panels could in principle absorb more light and generate more power than a flat panel of the same area footprint, which could prove useful in circumstances where the available space is limited. The idea is that any light that might normally reflect unused off a solar panel surface could then get trapped on another panel.

"This was a fully 'bio-inspired' idea," said researcher Jeffrey Grossman, a theoretical physicist at MIT. "I was hiking up at Lake Tahoe in California and noticing the shapes of trees, and wondering, 'Why do they have a given shape over another?'"

To investigate the optimal shape a 3-D panel might take in order to harvest the most light, scientists used a "genetic algorithm" to evolve solar panels in a computer simulation.

The model they developed randomly generated jumbles of flat, triangular double-sided solar panels and analyzed which generated the most power as a virtual sun moved across the sky. The best ones were then "mated" together for "offspring" that combined features of each with "mutations" that varied their structures. This process was then repeated for up to millions of generations, all in order to see what might evolve.

Since these jagged clusters would likely prove unwieldy to use, the scientists explored a simplified version they dubbed "the funnel," resembling a square box whose sides each caved in at the middle, a design that generates nearly as much energy as the best evolved structures.

"I originally thought that such structures would only be useful in situations where area is at a premium — for example, roof-tops," Grossman said. "Lately, though, we have been exploring more and more directions for ideas that may make 3-D structures more appealing than flat panels even when area is not limited."

For instance, 3-D solar panels could be as easy to implement as flat ones while generating more energy – for instance, by taking advantage of light reflected off the ground, Grossman said. Two-thirds of the cost of a panel for residential or commercial rooftop installation is due to the module and installation costs, not the cost of the silicon or other material that converts solar power to electricity. One could imagine shipping 3-D panels flat and then opening them up like origami for use.

Also, with 3-D solar panels, the way their components are set up, they generate power evenly throughout the day. To achieve the same with flat panels, one has to arrange them on systems that track the movement of the sun across the sky, "which is a big bummer, since you really don't want any moving parts sitting on your rooftop," Grossman said. "Anything that moves can break easily with time and needs more maintenance."

"I'm excited about the fact that such a seemingly simple idea could help lower the cost of solar power," Grossman added. The researchers are now teaming up with experimentalists to build prototypes of their computer-generated designs.