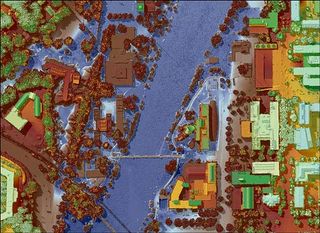 This image represents flood inundation of the Iowa River on the University of Iowa Arts Campus. Data was collected by the National Center for Airborne Laser Mapping's LiDAR survey of the Iowa River during the flood and will be used to develop detailed flood inundation maps. Different colors on this image from the University of Iowa Arts campus represent ground and water surface elevation, with flood waters represented in blue.
(Image: © IIHR—Hydroscience & Engineering)

In the early 17th century, William Shakespeare wrote, "Great floods have flown from simple sources." It turns out, Shakespeare’s conclusion holds up: Scientists are now showing that small streams may hold the secret to great floods.

In June 2008, no one fully expected flood waters to reach the 500-year-flood level in Iowa. The deluge overwhelmed streams and breeched levees in populated areas such as Cedar Rapids and Iowa City, where the Cedar and Iowa Rivers crested at unprecedented heights.

Thousands of residents were evacuated and 83 of Iowa's 99 counties were declared disaster areas. The University of Iowa (UI), caught in the path of rising flood waters, suffered hundreds of millions of dollars in damages.

Despite losses, Witold Krajewski and his colleagues at UI gained a rare opportunity to study the geophysical aspects of flooding in real time and to analyze the after-effects of flooding on residents.

With funding from the National Science Foundation (NSF), UI researchers expanded their efforts beyond geophysics to include flood research in areas of social science, health and other fields. Krajewski, a civil and environmental engineering professor and research engineer at UI, is leading these efforts as director of the new Iowa Flood Center.

At the top of his agenda is the development of prototype flood warning and forecasting systems to mitigate the effects of future floods.

How do you design a flood warning system?

The researchers follow rainfall, observed by the National Weather Service's Next Generation Weather Radar System, as it travels through the network of streams and rivers that drain the Iowa landscape.

"Our concept emphasizes studying small streams rather than large rivers and stresses the role of streams, the broader network, collecting and transporting rainfall," says Krajewski. "Observing small streams and monitoring soil moisture allows us to better understand and predict how rainfall and runoff contribute to a flood."

To aid in such analysis, the Iowa Flood Center is planning to deploy sensor systems into nearby streams to collect data. What the engineers and scientists learn will enhance their overall understanding of floods and improve the accuracy of flood warning systems.

Earlier flood research has already given UI scientists an excellent starting point. Prior to the disaster, Krajewski worked with Vijay Gupta from the University of Colorado and others on an NSF-funded project known as Hydro-Kansas. That effort focused on developing a more complex and accurate geophysical theory of floods.

Matching calculations of idealized river networks with flood data from a 21-square kilometer (8-square mile) experimental basin in Mississippi, Gupta and his research colleagues discovered a remarkable property: Stream networks and floods are mutually related. As a result, scientists can extrapolate findings from a small study area to a much larger one, so relationships between a stream network and flooding can be quantified and predicted.

Due to those properties, the researchers realized flood magnitudes grow according to well understood mathematical laws from smaller to larger watersheds. The conclusions are being tested from stream flow data in the much larger Whitewater River basin, east of Wichita, Kansas, under the Hydro-Kansas project. When the 2008 Iowa flood came, the Whitewater basin research provided essential data for testing.

"The floods observed last year in the Cedar and Iowa River basins displayed nice power laws," says Krajewski, referring to mathematical laws that help researchers find relations in data sets. "This is an unprecedented finding. It offers hope for greatly improving flood prediction from physical processes that the geophysical theory of floods is developing"

Krajewski also uses inundation maps to develop warning and forecasting systems. When the great flood occurred, researchers supported by NSF’s National Center for Airborne Laser Mapping mapped a large corridor of the Iowa River. Pilots in light aircraft flew over the disaster area and gathered flood elevation data as the flood wave crest moved over the region. The data showed scientists and engineers detailed information that may help predict flood effects and assist in the future planning and development of the area. The Iowa Flood Center is currently working on ensuring that the Iowa region has updated inundation maps.

"The maps have numerous benefits," says Krajewski. "They provide significant information for planners and emergency responders regarding risk assessment, and when combined with models based on the research theory of floods, they will constitute a new-generation, real-time flood forecasting system."

The academic community at UI hopes the Iowa Flood Center is the first step in establishing a permanent national flood research and education approach.