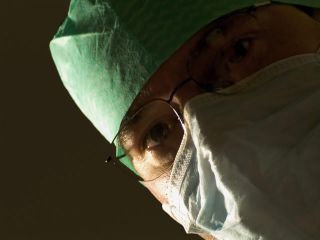 Reports of a mysterious medical condition are cropping up across the country but doctors are divided on whether it is a real disease or all in their patients' heads.

Called Morgellons Disease, patients who report having it describe sensations of creepy-crawlers beneath the skin and fibrous filaments oozing out of open wounds.

Interest in the disease was recently rekindled after afflicted Texas teenager Travis Wilson committed suicide about a month ago.

To date, no clinical studies have looked into Morgellons and only one paper mentioning Morgellons has been published in a medical journal. Appearing in a recent issue of the American Journal of Clinical Dermatology, the paper is co-authored by members of the Morgellons Research Foundation, a non-profit organization devoted to raising public awareness about the disease.

As of February 2006, more than 2,000 reports of the disease have been reported on the Foundation's website. Reports come from all 50 U.S. states and 15 nations, including Canada, the UK, Australia and The Netherlands.

The majority of reports have come from Texas, California and Florida.

Patients with the disease often describe feelings of insects or parasites scuttling beneath their skin and open lesions that heal slowly and which ooze out blue and white fibers, some as thick as spaghetti strands. Attempts to remove the fibers are said to elicit shooting pains radiating from the site.

The lesions range from minor to disfiguring in appearance and fibers appear either as single strands or as bundles. Patients also sometimes report the presence of fibers or black granular specks on their skin even in the absence of lesions. Some patients even report symptoms of the disease in their pets--dogs mostly, but also cats and horses.

According to statistics from the Morgellons Research Foundation, about 95 percent of patients also report suffering from disabling fatigue, or "brain fog," that hinders their ability to pay attention. Other reported symptoms include joint pain, sleep disorders, hair loss, decline in vision, and even the "disintegration" of perfectly healthy teeth. It appears that once patients contract the disease, they have it for life. To date, there have been no reports of spontaneous remissions.

A preliminary analysis of the fibers suggests they are more than just lint from household materials such as clothing, carpets or bedding, said Randy Wymore, an assistant professor of pharmacology and physiology at Okalahoma State University and the director of research at the Morgellons Research Foundation.

"The fibers are not common textiles, nor are they black specks of pepper, as several dermatologists have proposed," Wymore told LiveScience.

Further deepening the mystery, some analyses suggest the fibers might be made of cellulose, a molecule generally found in plants.

"They're basically fibers that you wouldn't expect to see in humans," said Raphael Stricker, a Lyme disease expert at the California Pacific Medical Center in San Francisco and a medical advisor to the Morgellons Research Foundation.

The disease is named after a medical condition described in 1674 by the British author Thomas Browne. Known as "Morgellons," Browne said the disorder caused children to "critically break out with harsh hairs on their backs..." The Morgellons Research Foundation says that it is doubtful that the 17th century disease is related in any way to modern day Morgellons.

Despite increasing reports of the condition, many doctors have barely heard of the disease and many treat it with a heavy dose of skepticism.

Michael Giradi, a dermatologist at the Yale School of Medicine, had never heard of Morgellons but when its symptoms were described to him, he was reminded of another disorder that is well known to doctors.

"They just renamed it," Giradi told LiveScience. "We just call it delusions of parasitosis."

Also known as Eckbom syndrome, delusional parasitosis is a psychiatric disorder in which patients fervently believe their bodies are infected by skin parasites that do not exist.

"It's basically when a patient thinks that there's something coming out of their skin, a material or bug of some sort, when truthfully there's nothing there," said Stacy Beaty, a dermatologist at the Saint Louis University School of Medicine.

In medical schools, physicians learn to watch out for the "matchbox sign" of delusional parasitosis, when patients bring in hair, skin or clothing lint, sometimes in matchboxes, that they claim contain the insects or parasites responsible for their torment. However, when examined, the samples reveal no such thing. The lesions and scratches sometimes seen on patients with delusional parasitosis are usually self-inflicted, Beaty said.

"To rule out any infectious causes and also to put the patient's mind at ease, a lot of times we'll do skin biopsies," Beaty said in a telephone interview. "If we feel that it'll be helpful, we might also start different anti-psychotic or anti-anxiety medicines."

Beaty said she was vaguely familiar with reports of Morgellons disease, but said that other doctors she had queried had never even heard of it.

In response to rising media coverage about the condition, the Los Angeles Department of Health Services recently issued a statement that said bluntly:

"No credible medical or public health association has verified the existence or diagnosis of 'Morgellons Disease.' The current description of the disease is vague and covers many conditions."

Wymore, the Oklahoma State University researcher, says that debating whether Morgellons is a real disease or not is not the right approach.

"This population is suffering greatly," Wymore said. "A better question would be, 'Is Morgellons Disease a purely psychiatric disorder?' and the answer is 'No.' Morgellons also has physical effects on a person. In addition to the skin lesions and the unusual fibers and other shed material, there are nervous system effects that include behavioral changes, cognitive changes and peripheral neuropathy."