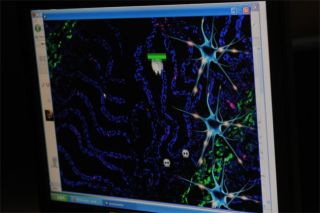 Students enrolled in the Game Design Through Mentoring and Collaboration learn the basics of 3D modeling and animation software as well as the logic of game design and programming. The program is designed to increase student interest in science, technology, engineering and mathematics (STEM) subjects. Here, a screen shot of immunology-based game.
(Image: © Evan Cantwell, George Mason University)

"Your game is annoying," one student at the Be the Game summer camp tells another. The boy just laughs. "That's because you can't beat it," he says.

This is an exchange between Schuyler Truesdale, a sophomore at Suitland High School in Forestville, Md., and seventh grader Jordan Chandler of Stephen Decatur Middle School in Clinton, Md. Both students participated in a four-week camp focused on video game design that took place this summer on George Mason University's Arlington, Va., campus, an extension of the school's Game Design Through Mentoring and Collaboration (GDMC) program.

Funded by an NSF grant, GDMC is held throughout the school year at McKinley Technology High School in Washington, D.C. More than 200 middle and high school students from about 35 area schools have participated in the program since it started three years ago.

Designed to increase student interest in science, technology, engineering and mathematics (STEM) subjects in traditionally underserved communities, the Mason-run program provides an environment in which students learn the basics of professional-level 3D modeling and animation software as well as the logic of game design and programming. Students also have the opportunity to become paid mentors, helping newer students hone their skills.

At the helm is Mason instructional technology professor Kevin Clark. Mentoring, he says, is a large part of the program and helps students master the technology skills they've acquired.

"We spend a lot of time teaching the returning students how to be good mentors," he said. "We teach them strategies for how to troubleshoot if someone is having a problem or how to re-engage a student who doesn't seem to be working. Our big message is 'don't do it for them. Help them learn.'"

Engaging the students does not seem to be a problem for Clark and his team. "These students come in voluntarily to learn how to make video games. At the end of the day, some of them don't want to leave their computers," said Neda Khalili, a Mason doctoral student who has been with the program since 2007.

Khalili tracked student-mentor interactions at this year's camp sessions. The student gamers range in age from 9 to 19. About 85 percent are African American, and the majority of them are male. These students and their design processes are the subject of Khalili's dissertation.

The introduction of science topics into the game design was a new addition to the program this year. During the school year, the sessions take place on Saturday mornings and are offered on a drop-in basis. For the summer session, Clark and his co-principal investigator Kim Sheridan, who is a professor at Mason with a joint appointment in education and visual and performing arts, were working with a specific group of kids so they decided to take it up a notch.

To do that, they brought in Melanie Stegman, a biologist from the Federation of American Scientists. The gamers broke into teams and were tasked with creating a playable computer game that demonstrated a scientific concept related to immunology.  Stegman met with students to provide an overview of immunology and web-based resources. She also consulted with the teams on their specific projects. At the end of the camp, the teams presented their games and explained how it illustrated the scientific concept.

"It was wonderful to see how quickly students readily adapted their minds to focus on a science game," said Khalili. "They changed from picking 'good' guys and 'bad' guys in their games to picking the right antibiotic to fight off the infection."

As the gamers discussed glial cells and neurotransmitters, red blood cells twirled across computer screens. The studio atmosphere of the work space is another component of the program and a part of what Sheridan brings to the project.

"A lot of my work on the project has been about transforming the classes from a traditional step-by-step technology class into one in which kids work on projects that are more open-ended," said Sheridan, who is also a visual artist. "In order to make the game they want they have to use math, science, and art – and put it all together. How do you support that and make it work for all kids who are coming at it with different intelligences and strengths?"

In addition to the mentoring they received while creating their games, the students are also introduced to the professional aspects of the field through what Clark calls STEM summits.

Over the years, the young gamers have met with professional game designers, entrepreneurs, and astronaut Bernard Harris to see how the skills they are acquiring can be applied in the workplace and what college preparation you need to attain those careers.

"By integrating the STEM content, we are creating high-quality learning opportunities and demonstrating that what they learn now is relevant and applicable in everyday lives," said Clark.