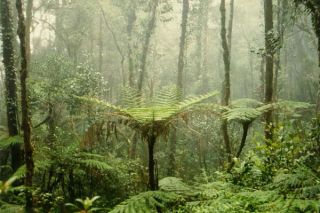 Upper montane cloud forest during rainfall at Mt. Kinabalu in Malaysia.
(Image: © L. A. Bruijnzeel and I. S. M. Sieverding)

With billions of overlapping leaves, stretching sometimes for hundreds of feet above the ground, the canopies of the world's rainforests act like giant umbrellas – catching rain before it has a chance to reach the forest floor. It turns out that these arboreal umbrellas intercept almost 2 trillion gallons of rain each year, a new study that could improve our understanding of the impacts of climate change finds.

That's about 20 percent of the rain that falls from the sky over the world's forests. The massive amounts of rain essentially puddle up on the leaves before evaporating back into the atmosphere. While scientists have estimated rain interception for specific forests before, Diego Miralles, a researcher at VU University in Amsterdam and lead author of the new study, says this is the first global estimate.

"The model that we use, known as Gash's Model, has been successfully applied in different forests around the world since the beginning of the '80s," Miralles said. "The uniqueness of our study is that we have taken satellite observations of precipitation and forest cover and adapted this well-validated model to create global results for the first time."

These estimates could be used in global climate models to improve predictions, Miralles told OurAmazingPlanet. While two of the three parameters of water-cycle models (part of the overall climate models) are well-known, until now, the evaporation piece was the "weak link.”" Estimating the amount of water collected by tree canopies could also help predict the impact of deforestation on climate change, Miralles added.

Miralles and his colleagues used NASA satellite data for rain amount, intensity (volume of rain per hour, for instance) and canopy cover. Intensity matters, because if, say, 10 buckets of water fall in two minutes, more of it will likely drip off the already saturated leaves than if it were to fall in two hours. The longer time period would allow some of the falling rain to evaporate.

The rain intensity was calculated using lightning data since certain types of clouds, in particular cumulonimbus clouds, which dump large amounts of rain in a short period of time, send lightning bolts through the sky.

So far, they team has made monthly maps of the volume and percent of rainfall intercepted by blocks of canopy-covered forest, each with an area of 150 square miles (400 square kilometers). Forests made up of needle-leaf trees captured 22 percent of the rainfall, while broad-leaf deciduous forests intercepted 19 percent and evergreen forests came in at 13 percent.

While needle-leaf forests captured the most water, it turns out that it's not because of their leaf structure.

The research was published in the Aug.31 issue of the Journal of Geophysical Research.