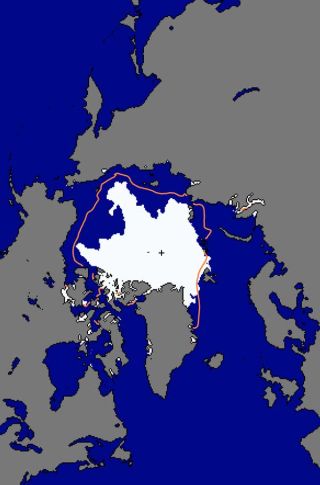 Daily Arctic sea ice extent on September 10, 2010, the reported minimum extent for the year. The orange line indicates the median extent for that same day from 1979 to 2000. The black cross marks the geographic North Pole.
(Image: © National Snow and Ice Data Center.)

Arctic sea ice coverage appears to have dropped to its lowest extent for the year as of last week, the National Snow and Ice Data Center (NSIDC) announced today (Sept. 15). Levels are the third-lowest recorded since 1979, when data were first taken, continuing the long-term trend of decreasing summer ice, according to the report.

Satellite data revealed just 1.84 million square miles (4.76 million square kilometers) of ice blanketing the Arctic Sea as of Sept. 10. Only the years 2007 and 2008 exhibited lower levels of sea ice over the past 31 years.

This is only the third time in the satellite record that ice extent has fallen below 1.93 million square miles (5 million square kilometers), and all those occurrences have been within the past four years.

The record lows come despite a late start for the melt season this year and, according to the NSIDC data, this year will mark the fastest melt season on record if today's reported ice levels are truly the season's minimum.

The NSIDC will release more conclusive data in October.