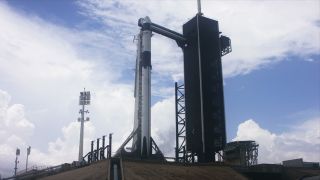 The SpaceX Falcon 9 rocket and Crew Dragon stand at Launch Complex 39A on May 27, 2020, during the first launch attempt for NASA’s SpaceX Demo-2 mission.
(Image: © NASA TV)

The SpaceX Crew Dragon spacecraft is now scheduled to launch tomorrow (May 30) after weather forced a launch delay Wednesday (May 27). If bad weather strikes the Cape Canaveral, Florida launch site again at the wrong time, the launch will once more be delayed.

But why should some ugly weather scrub a Falcon 9 rocket launch? When NASA astronauts Doug Hurley and Bob Behnken do take off in their SpaceX-built rocket, it will mark the first attempt to put humans in orbit from U.S. soil in a decade. And the  rocket is powerful enough to punch through the atmosphere and into space. Why should a few clouds bother it?

First, launches like these have to be perfectly timed. For the craft to reach the International Space Station it must launch at the scheduled minute, or wait for another opportunity. So any weather delay is important.

And the fact is, NASA has had a long and unfortunate history with launch weather, as NASA Spaceflight.com noted May 24. Freezing weather before a 1986 Space Shuttle Challenger launch wrecked the rubber O-ring seals on the solid rocket boosters. The shuttle exploded 73 seconds after launch and all seven astronauts on board died. The Apollo 12 mission survived a pair of lightning strikes, but they scrambled instruments during takeoff and triggered alerts that nearly led NASA to abort the mission.

Related: How to watch the historic SpaceX astronaut launch online

Wednesday's launch was canceled within half an hour of the planned takeoff because of lightning in the area and a storm cloud with an "anvil" formation. That cloud was close enough to the launch site that, when it didn't clear up, NASA said it violated the agency's weather rules. And the launch itself could have triggered lightning strikes on the spacecraft, according to NASA administrator Jim Bridenstine.

Lighting isn't the only weather feature NASA tracks before a launch though. During the Space Shuttle era, NASA published criteria for those launches. Some of the rules included:

There were also a complex series of rules related to electric fields and lighting designed to avoid lightning strikes on the vehicle. But the most straightforward was this:

All this could spell further trouble for NASA and SpaceX's commercial crew plans for the weekend. National Weather Service reports show rain and thunderstorms coming and going all day today (May 29) at Cape Canaveral, and similar conditions are in the forecast for tomorrow's launch.