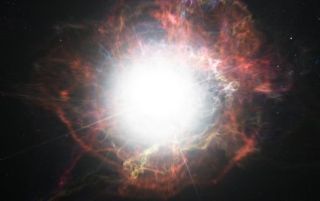 The red supergiant star Betelgeuse is nearing the end of its life, and researchers are preparing for what it will look like when the star dies in a fiery explosion called a supernova. Located in the constellation Orion, the star is about 1,000 times the size of the sun. Betelgeuse's brightness has been dipping to the lowest point in the past 100 years, and some scientists have suggested that the star is getting close to running out of fuel and going supernova.

In a new study, researchers at the University of California, Santa Barbara have modeled the stellar explosions that occur when pulsating supergiants like Betelgeuse die, showing the expected brightness of these supernovas, according to a statement from the university.

"We wanted to know what it looks like if a pulsating star explodes at different phases of pulsation," Jared Goldberg, lead author of the study and a physics graduate student at UC Santa Barbara, said in the statement. "Earlier models are simpler because they don't include the time-dependent effects of pulsations."

Video: Will the Giant Star Betelgeuse Explode?
Related: The Brightest Stars in the Sky: A Starry Countdown

When a massive star runs out of material in its core, the star will collapse under its own gravity and turn into a supernova. Researchers have estimated that this will likely happen to Betelgeuse within the next 100,000 years, which is relatively soon in astronomical terms. This explosion will create a burst capable of briefly outshining an entire galaxy, according to the statement.

Supernovas differ based on the dying star's mass, radius and total explosion energy. Pulsations in stars make it more difficult to predict how the stars will explode because different layers of the star may expand or contract opposite of one another. Light from compressed layers of the star are fainter, while light from expanding layers appear brighter.

"It just looks like a supernova from a bigger star or a smaller star at different points in the pulsation," Goldberg said in the statement. "It's when you start considering pulsations that are more complicated, where there's stuff moving in at the same time as stuff moving out — then our model actually does produce noticeable differences."

When modeling Betelgeuse, the researchers found that the entire star pulsates in unison, meaning that when the star dies, it will behave as though it were a static star with a given radius. Therefore, supernova models for stars like Betelgeuse look similar to models that do not account for pulsation, according to the statement.

The findings were published Feb. 28 in The Astrophysical Journal.

OFFER: Save at least 56% with our latest magazine deal!

All About Space magazine takes you on an awe-inspiring journey through our solar system and beyond, from the amazing technology and spacecraft that enables humanity to venture into orbit, to the complexities of space science.View Deal