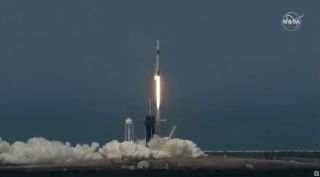 SpaceX's Crew Dragon craft atop a Falcon 9 rocket lifted off from Launch Pad 39A at Kennedy Space Center in Florida at 3:22 p.m. EDT on May 30, 2020, carrying two NASA astronauts to the International Space Station.
(Image: © NASA TV)

Astronauts Robert Behnken and Douglas Hurley became the first U.S. astronauts to head into orbit from American soil since 2011, when the Space Shuttle program ended and NASA astronauts began relying on rides in Russian Soyuz capsules to reach orbit. The current mission, called Demo-2, is the last step in certifying SpaceX's Crew Dragon vehicle and Falcon 9 rocket for regular use by NASA.

Behnken and Hurley will rendezvous with the International Space Station (ISS) in approximately 24 hours, when the Crew Dragon will autonomously dock. (A manual option is available, should something go wrong.) The two astronauts will then spend an undecided amount of time aboard the ISS, conducting further tests, before returning to Earth.

Related: Watch live NASA coverage of the launch and docking through Sunday, May 31

The launch took place at Launch Complex 39A at Kennedy Space Center in Florida. The launch pad, which hosted some of the liftoffs of the Apollo program as well as Space Shuttle launches, is now the site of the first launch of NASA astronauts aboard a privately developed spacecraft. If the rest of the Demo-2 mission goes well, the Crew Dragon will likely be certified by NASA's Commercial Crew Program for continued use.

The first attempt at a launch on Wednesday, May 27, had to be scrubbed with only about 17 minutes to go before liftoff due to inclement weather. Saturday's weather cooperated, allowing a successful launch at 3:22 p.m. EDT (1922 GMT).

History has been made. "Today was just an amazing day," NASA administrator Jim Bridenstine said after the successful launch on NASA TV. "I'm breathing a sigh of relief. But I will also tell you I'm not going to celebrate until Bob and Doug are home safely."

Related: Here's every spaceship that's ever carried an astronaut into orbit

The successful launch of Crew Dragon is an historic step for SpaceX, the private spaceflight company founded by Elon Musk. SpaceX has been developing the Dragon line of spacecraft since 2004, with a successful maiden flight of Dragon 1, an uncrewed cargo vessel, in 2010. The Dragon 2 class of vehicles includes Crew Dragon, which is currently certified to stay in orbit for up to 110 days, and a cargo vehicle, Cargo Dragon. Cargo Dragon is expected to launch for the first time in October.

An uncrewed Crew Dragon mission successfully docked with the ISS in March 2019.

If Crew Dragon proves safe, it may ferry more than astronauts. SpaceX signed an agreement with space tourism company Space Adventures in February to use the spacecraft to launch space tourists into orbit as early as 2021. The cost for each passenger will be tens of millions of dollars.