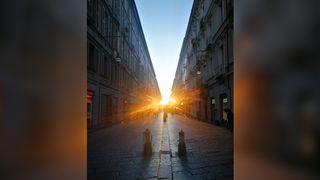 A team of scientists has found an alignment that occurs between the rising sun and a major street in Turin that was constructed around 28 B.C.
(Image: © Guido Cossard)

Scientists in Turin, Italy, have discovered that a couple of days each year, the rising sun perfectly aligns with one of the city's main streets that was constructed around 28 B.C.

Scientists led by physicist Guido Cossard, president of the Valdostan Archaeoastronomy Research and Studies Association in Italy, discovered the alignment on a street, now called Via Giuseppe Garibaldi.

"The phenomenon is visible only for one or two days around the 4th of February," Cossard told Live Science, noting that on those days it is visible only for a few minutes, from about 8 a.m. to 8:05 a.m. "People don't know so much about this phenomenon. It is our purpose to disseminate this information in order for people to appreciate it," Cossard said.

Cossard thinks the alignment was intentional and that Turin's ancient builders constructed the street so that the sun would rise directly along that street on Feb. 5, the day when ancient records say the Roman Emperor Octavian (also called "Augustus") was given the title "Pater Patriae" (which means "father of the country") by Rome's senate.

However, scientists not affiliated with the research told Live Science that the alignment may be a coincidence and not intentional — like Manhattanhenge in New York City.

The team's research was recently published in Italian in the book "Torino Citta Celeste" (Keltia Editrice, 2020), which translates to "Turin Celestial City" in English.

Was the alignment intentional?

Ancient records say that on Feb. 5 in the year 2 B.C., the Roman senate conferred the title "Pater Patriae" on Octavian. By that time, he had been the sole ruler of the Roman Empire for 28 years, after defeating Marc Antony and Cleopatra in 30 B.C.

There is a problem, however, with tying this event to the street's light show; Via Giuseppe Garibaldi was constructed around 28 B.C., about 26 years before Octavian received his celebrated title. Live Science talked to seven scholars not affiliated with the research, and they noted that no other major festival or celebration is known to date to Feb. 4-5.

Moreover, Octavian's title might not have an especially memorable connection with the day that Octavian received it. While the title "Pater Patriae" was conferred to Octavian in 2 B.C., the title may have been used much earlier, Cossard said.

"The acknowledgment was already popular long before that date. This is witnessed from [Ovid] in his book 'I Fasti,'" Cossard told Live Science. In that ancient text, the writer Ovid states that "history had already conferred" the title to Octavian and that for a "long time" Octavian had been "the father of the world." (Text translated by James G. Frazer.)

The scholars not affiliated with the research told Live Science that they doubt the title would have been used in 28 B.C. and celebrated at that time on Feb. 5.  But there may have been another reason for the celestial alignment; it's possible that Turin was founded on or near Feb. 5 and that the alignment may have marked the city's founding, a few of the scholars said.

While historians may continue to debate whether or not the alignment was intentional, one thing is certain; the beauty of it is not in dispute.