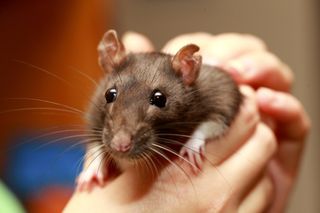 They may look cute, but pet rats can be dangerous.
(Image: © Shutterstock)

Here's reason No. 1,001 that you shouldn't get too cozy with rats: Even the most adorable of them are still potential disease vectors.

That's the takeaway from a newly reported case of a woman who developed "rat bite fever," a potentially fatal disease, after being bitten by her pet rat.

The 36-year-old woman, who lives in France, went to the hospital after she developed a fever, joint and muscle aches, and headaches, according to the report, published today (Oct. 30) in the The New England Journal of Medicine. Doctors also noted that the woman had a rash of small, red bumps on her hands and feet, while her ankles, knees and wrists were swollen.

The woman told doctors that, 10 days earlier, she had been bitten by her pet rat. That's when doctors started her on antibiotics, suspecting that she had acquired an infection from the rodent.

They were right: A blood test revealed that she was infected with Streptobacillus moniliformis, a bacterium commonly found in the mouths of rodents.

Related: 11 Ways Your Beloved Pet May Make You Sick

Doctors diagnosed the woman with rat bite fever, a relatively rare illness that can be spread via bites or scratches from rats, according to the Centers for Disease Control and Prevention (CDC). About three-quarters of people with rat bite fever develop a rash, and about half of them develop joint pain and swelling.

The disease can cause serious complications, including abscesses inside the body and infections of the liver, kidneys, lungs, brain and heart. About 1 in 10 people with rat bite fever due to S. moniliformis infection die from the illness, the CDC says.

However with prompt treatment, most people recover from the disease. In the woman's case, her symptoms went away after about a week of treatment with antibiotics, the report said. When doctors checked in on her at a follow-up appointment three months later, she remained well, the authors wrote.

To avoid catching diseases from pet rodents, the CDC recommends that people wash their hands immediately after touching, feeding or caring for pet rodents or cleaning their cages. The CDC also warns people not to kiss, nuzzle or hold pet rodents close to their faces, as this can startle the rodent and increase the chances of being bitten.

You should also let your doctor know if you have been around pet rodents, especially if you become sick or are bitten, the agency says.

Because rodents can spread disease, the CDC does not recommend pet rodents for pregnant women, families with children age 5 or younger, or people with weakened immune systems. These groups are at higher risk of contracting serious illnesses from rodents.