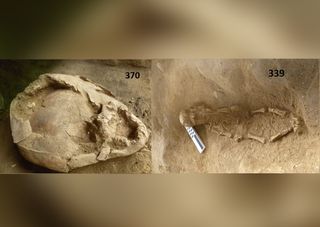 The infants were buried wearing helmets made from the skulls of children.
(Image: © Sara Juengst)

Two infants were buried some 2,100 years ago wearing "helmets" made from the skulls of other children, archaeologists have discovered.

The remains of the two infants were found with nine other burials at a site called Salango, on the coast of central Ecuador. The archaeologists who excavated the burials between 2014 and 2016 recently published the details of their findings in the journal Latin American Antiquity.

The team says this is the only known case in which children's skulls were used as helmets for infants being buried. The scientists don't know what killed the infants and children.

Putting the "helmets" on

One infant's "face looked through and out of the cranial vault" — the space in the skull that holds the brain — the archaeologists wrote.

Interestingly a "hand phalanx," a type of bone, was found wedged between the infant's head and the helmet. They don't know whom the hand phalanx belonged to, said Sara Juengst, lead author of the paper and an anthropology professor at the University of North Carolina, Charlotte. Juengst noted that other tests, such as those using DNA and strontium isotopes (variations of an element with different numbers of neutrons), may help to identify the owner of the bones.

Previous work suggests that a volcanic eruption covered the area in ash not long before the infants were buried. This eruption may have affected food production, and the newly discovered bones suggest the infants and children suffered from malnutrition, the researchers said.

It's possible that "the treatment of the two infants was part of a larger, complex ritual response to environmental consequences of the eruption," the archaeologists wrote, noting that "more evidence is needed to confirm this."