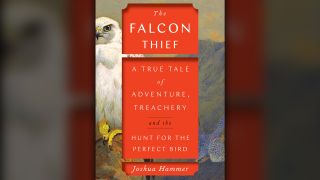 Below is an excerpt of "The Falcon Thief: A True Tale of Adventure, Treachery and the Hunt for the Perfect Bird" by Joshua Hammer, published by Simon & Schuster on Feb. 11, 2020.

Read more about the amazing true story of the man who spent decades smuggling and selling wild falcons, some of which commanded prices in the tens and thousands of dollars.

The man had been in there far too long, John Struczynski thought. Twenty minutes had elapsed since he had entered the shower facility in the Emirates Lounge for business and first-class passengers at Birmingham International Airport, in the West Midlands region of England, 113 miles north of London. Now Struczynski stood in the corridor outside the shower room, a stack of fresh towels in the cart beside him, a mop, a pail, and a pair of caution wet floor signs at his feet. The janitor was impatient to clean the place.

The man and a female companion had been the first ones that day to enter the lounge, a warmly decorated room with butterscotch armchairs, a powder-blue carpet, dark wood columns, glass coffee tables, and black-shaded Chinese porcelain lamps. It was Monday, May 3, 2010—a bank holiday in the United Kingdom—and the lounge had opened at noon to accommodate passengers booked on the 2:40 p.m. Emirates direct flight to Dubai. The couple had settled into an alcove with a television near the reception desk. Minutes later the man had stood up and headed for the shower, carrying a shoulder bag and two small suitcases. That had struck Struczynski as strange. Who brings all of his luggage into the business-and-first-class shower room? And now he had been in there two or three times longer than any normal passenger.

A tall, lean man in his forties with short-cropped graying hair and a brush mustache, Struczynski had spent a decade monitoring 130 closed-circuit television cameras on the night shift at a Birmingham shopping mall, a job that “gave me a background in watching people,” he would later say. That February, after the security firm laid him off, a management company had hired him to clean the Emirates Lounge. The first week he was there, the contractor enrolled him in an on-site training course to identify potential terrorist threats. The course, he would later say, heightened his normal state of suspicion.

As Struczynski puttered around the hallway, the shower room door opened, and the passenger—a balding, slender, middle-aged white man of average height—stepped out. He slipped past Struczynski without looking at him.

The cleaner opened the shower facility door and looked around the room.

My goodness, he thought. What do we have here?

"The Falcon Thief," by Joshua Hammer

"Joshua Hammer has that rare eye for a thrilling story, and with The Falcon Thief he has found the perfect one— a tale brimming with eccentric characters, obsession, deception, and beauty. It has the grip of a novel, with the benefit of being all true." — David Grann, NY Times bestselling author View Deal

The shower floor and glass partition surrounding it were both bone-dry. All the towels remained stacked and neatly folded. The toilet for the disabled hadn’t been used. The washbasin didn’t have a drop of water in it. Though the man had been inside the room for twenty minutes, he didn’t appear to have touched anything.

Struczynski recalled the terrorism workshop that he had taken three months earlier, the exhortations from the instructor to watch out for odd looks and unusual behavior. This passenger was up to something. He knew it. Not sure what he was looking for, he rifled through the towels and facecloths, rummaged beneath the complimentary toothpaste tubes and other toiletries, checked the rubbish bin. He mounted a footstool and dislodged two ceiling tiles, wedging his hand into the hollow space just above them. Nothing.

He shifted his attention to the baby-changing area. In the corner of the alcove stood a plastic waist-high diaper bin with a round flip lid. Struczynski removed the top and looked inside. He noticed something sitting on the bottom: a green cardboard egg carton.

In one of the middle slots sat a single egg, dyed blood-red.

He stared at it, touched it gently. What could it mean?

He recalled the recent arrest at Heathrow Airport outside London of a man trying to smuggle rare Indian box turtles in egg cartons. But that seemed so odd. More likely this passenger was moving narcotics—like the gangsters in Liverpool who wedged packets of heroin and cocaine inside plastic Kinder Egg containers. That’s it, he thought. It must have something to do with drugs.

Struczynski approached the reception area, a few steps from where the man and his traveling companion were sitting, and spoke softly to the two women working at the front desk. We may have a problem, he murmured, describing what he had just observed. He suggested that they call airport security, then returned to the shower and locked the door so that no one could disturb the evidence. Soon two uniformed security men entered the lounge, interviewed Struczynski, and examined the shower. The facility couldn’t be seen from the alcove in which the passengers were sitting, and so, absorbed in conversation, the couple failed to notice the sudden activity.

The security guards summoned a pair of airport-based plainclothes officers from the West Midlands Counter Terrorism Unit. Formed in 2007 in the wake of the London bus-and-underground bombings, the unit had grown from seventy to nearly five hundred officers, and was chiefly concerned with combating Islamist extremism. Counterterrorism forces had recently arrested a gang that had conspired to kidnap and behead a British officer and post the footage online, and had helped foil a plot by a Birmingham-born terrorist to blow up transatlantic airliners using liquid explosives. These men, too, questioned Struczynski, examined the egg box in the diaper bin, and asked the janitor to point out the passenger. They flashed the badges attached to lanyards around their necks, and chatted with him and his companion politely. Struczynski watched discreetly as the pair stood up and, flanked by the police, exited the lounge.

Excerpt from THE FALCON THIEF by Joshua Hammer