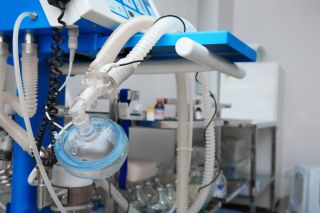 Around 88% of patients with COVID-19 who were put on a ventilator in a New York hospital system died, according to a new study.

In the new study, researchers analyzed data from 5,700 patients who were hospitalized from March 1 to April 4 through Northwell Health, the largest health system in New York, with 12 hospitals across New York City, Long Island and Westchester County. Of those patients, 2,634 were discharged or had died by the end of the study, and 320 patients with a recorded outcome were put on ventilators. Nearly 9 in 10 of those ventilated patients died.

Of the 2,634 patients, ventilated or not, about 21% died, according to the researchers. But that meant the majority, or 3,066, of the patients were still hospitalized when the study ended, which could have "biased the findings," the authors wrote.

The researchers found that among the patients that were hospitalized, the most common underlying conditions were hypertension (around 56.6%), obesity (around 41.7%) and diabetes (around 33.8%).

Rather, "patients who are put on ventilators typically have more severe disease," and are therefore likelier to die, Davidson told Live Science in an email. "Mechanical ventilators are not dangerous, and in many cases, are life saving machines."

The findings were published April 22 in the journal JAMA.