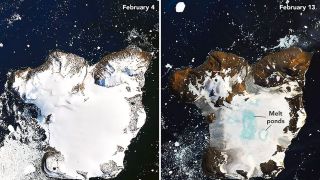 It's easy to forget that Antarctica is technically a desert, until you see it without snow.

A new pair of satellite images shared by NASA's Earth Observatory makes that stark reality clear as ice. NASA's Landsat-8 satellite snapped the two images of Eagle Island (a small island off Antarctica's northwest tip) on Feb. 4 and Feb. 13, 2020, bookending a period of record high temperatures in the southernmost continent. Between the two images, a significant amount of the island's glacial ice disappeared, revealing huge swaths of the barren brown rock underneath.

According to glaciologist Mauri Pelto, a professor of environmental science at Nichols College in Massachusetts, the island lost about 20% of its seasonal snow accumulation in just a few days.

"You see these kinds of melt events in Alaska and Greenland, but not usually in Antarctica," Pelto told NASA.

Related: One of Antarctica's fastest-shrinking glaciers just lost an iceberg twice the size of Washington, D.C.

The melt coincided with not one, but two record-high temperatures recorded on Antarctica this month. On Feb. 6, a research station on the northern edge of the Antarctic Peninsula (the finger of land on the continent's northwest tip, closest to South America) recorded a new record-high temperature of 64.9 degrees Fahrenheit (18.3 degrees Celsius) — surpassing the previous record of 63.5 F (17.5 C), set in March 2015.

Days later, on Feb. 9, researchers on the nearby Seymour Island saw their thermometers hit 69.35 F (20.75 C), setting another all-time high for the continent. (For comparison, that's about the same temperature reported in Los Angeles, on the same day. Balmy!)

As the new images show, those high temperatures caused significant melting on nearby glaciers. According to Pelto, Eagle Island lost nearly 1 square mile (1.5 square kilometers) of snowpack to the heat, creating several large ponds of bright blue meltwater at the island's center.

While every season has its highs, this summer has been especially warm for Antarctica, Pelto said. The continent has already seen two heatwaves this season — one in November 2019 and one in January 2020 — reminding us that significant melt events like these are becoming more common as global warming continues unchecked.