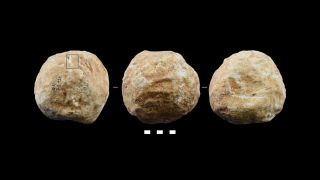 For nearly 2 million years, ancient humans crafted stones into hand-size balls, but archaeologists were unsure why.

Now they know: Ancient people used them as tools to get at the tasty marrow within animal bones, a new study finds.

In other words, if a bone were a can of soup, these ancient stone balls were like ancient can openers.

The finding is a remarkable one; archaeologists have wondered for decades exactly how ancient humans used these stone balls. "Our study provided evidence, for the first time, regarding the function of these enigmatic-shaped stone balls that were produced by humans for almost 2 million years," study lead researcher Ella Assaf, a postdoctoral researcher in the Department of Archaeology and Ancient Near East Cultures at Tel Aviv University in Israel, told Live Science in an email.

Archaeologists have found "these enigmatic, mysterious artifacts" in some of the world's oldest archaeological sites in Africa, Europe and Asia, but no one in modern times had figured out how these ancient round stones were used, Assaf said.

That changed when Assaf and her team came across a cache of 30 stone balls in Qesem Cave in Israel, where humans lived from about 400,000 to 200,000 years ago

Of the 30 balls, 29 were made of either limestone or dolomite rock, in contrast to the "hundreds of thousands of the stone tools found in the cave [that were] made of flint stone," Assaf said.

The other tools found in Qesem Cave were innovative for their time, but "the balls represent a very old technology," Assaf said. In fact, the stone balls' "presence in Qesem represents their latest and last appearance in the Levant [the lands immediately east of the Mediterranean]," Assaf said.

To solve the mystery of the stone balls, study senior researcher Emanuela Cristiani, an archaeologist at Sapienza University in Rome, and her colleagues examined the stone balls microscopically. They discovered wear marks and organic residues indicating that the stones "were used by the cave inhabitants to break animal bones and extract the nutritional marrow," Assaf said.

However, the international team wanted to be sure, so they did two experiments. In the first, they used cobblestones (naturally rounded stones larger than pebbles) to break apart bones. In the second, the team used tools to shape their own stone balls and then tested them on bones.

After busting some bones, the team learned that the shaped stone balls were much more efficient than the natural ones at breaking bones and getting to the marrow, a finding that supported the conclusion from the microscopic analyses.

"These tools provide comfortable grip, they don't tend to break easily, and you can rotate them and use them repetitively since they have multiple ridges," Assaf said. "These high ridges help to break the bone in a 'clean' way, and you can extract the marrow relatively easily."

Moreover, breaking bones left tiny wear marks on the modern replicas that were "very similar to the archaeological traces" on the ancient stone balls, Assaf said. "This confirmed our preliminary assumption that these items were indeed used to extract bone marrow," she said.

Related: Back to the Stone Age: 17 Key Milestones in Paleolithic Life

The ancient stone balls were covered with a shiny layer caused by exposure to the elements over time, Assaf said. Curiously, this mother-of-pearl-like layer was different from the layers found on the other stone tools in the cave, suggesting that "the balls were exposed to a different environment for a very long period and then collected by the cave inhabitants and brought inside."

In effect, it seems that the ancient Qesem Cave inhabitants were reusing these stones, much like second-hand shoppers.

"The Qesem people specifically selected these ancient, ready-made tools that somebody knapped before them (perhaps from older sites), probably due to their specific round morphology," Assaf said. "It wasn't a random choice — they brought them to the cave especially for bone-breaking activities."

Bone marrow has the greatest percentage of fatty acids within an animal body, so these stones "might have helped enhance human caloric intake and adaptation in the lower Paleolithic period," (2.7 million to 200,000 years ago), at Qesem Cave and possibly beyond, the researchers wrote in the study.

The study was published online April 9 in the journal PLOS One.