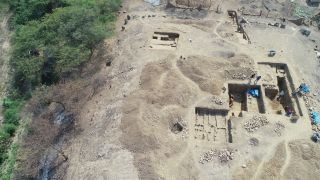 Archaeologists have discovered a 3000-year-old megalithic temple in Peru that an ancient "water cult" used for fertility rituals.

The temple, found at the Huaca El Toro archaeological site, is located in modern-day Oyotún in the Zaña Valley of  northwestern Peru. It is the first megalithic temple, or one made from large stones, found in this valley, which sits between two rivers that join together and give rise to the Zaña River.

The ancient cult, whose members worshiped water, likely built the temple in an area where a new river rises as a kind of "territorial symbolism," said Edgar Bracamonte, an archaeologist with the Royal Tombs of Sipan Museum in Peru, who took part in the excavations. "Water is the most important element to live, and in this time, water was so difficult to access without technology."

The temple dates back 3,000 years, to the Formative period, a stage of ancient American history that predates any major hydraulic works, Bracamonte said. The temple's location between the rivers and the presence of the surrounding "pocitos," or small wells that the ancients used to predict rainy seasons, "show water's importance to people of [the] Formative period," he added.

The temple was constructed using different sizes of large, carved rocks, which were moved to the area from mountains around 1.86 miles (3 kilometers) away. The temple is thought to have been abandoned around 250 B.C. and then used as a burial ground by the Chumy people who, around 1300, reoccupied the site, Bracamonte said.

The team discovered 21 tombs in the temple; 20 belonged to the Chumy people and one belonged to an adult male buried during the Formative period. During that period, bodies were oriented east to west and buried with a single offering. This adult male was buried with a ceramic bottle that had two spouts and a bridge handle, a style characteristic of the final Formative period, Bracamonte said.

The excavations also revealed that the temple was occupied in three stages — the first between 1500 B.C. and 800 B.C., when people built the structure's foundations from cone-shaped clay; the second between 800 B.C. and 400 B.C., when the megalithic temple was built with influences from the pre-Inca civilization known as the Chavin; and the third between 400 B.C. and 100 B.C., when people added circular columns that were used to hold up the roof of the temple. The excavations took place between September and November of this year, but the researchers are continuing to analyze their finds in the lab.