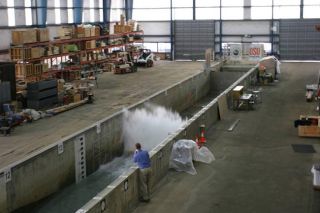 On September 29, 2009 a magnitude 8.0 earthquake struck Samoa and the American Samoa Islands. Nearly 20 minutes later, villages were inundated by four tsunami waves ranging from 15 to 20 feet high and reaching as far as a mile inland.

While an undergraduate student at the University of Notre Dame, I surveyed the effects from a similar scenario, the devastating Dec. 2004 Indian Ocean Tsunami. The tsunami engulfed entire communities minutes after residents felt a severe earthquake on land.

As part of a ten-week program, I worked with civil engineer Tracy Kijewski-Correa on modeling a hotel in Thailand that suffered structural damages under the catastrophic waves.

As there is a limited amount of research on tsunami loading — the forces impacting built structures — I compared the failure modes and moments I found in my simulation model to those from more thoroughly studied natural hazards, such as the Northridge Earthquake and Hurricane Katrina.

From this analysis I came up with recommendations on how to improve construction within a tsunami inundation zone. A key finding was that elevating structures or using breakaway walls drastically reduces the forces that can damage a structure, reducing the area subjected to assault or allowing an incoming wave to simply pass through.

While my recommendations seem practical, the most rewarding part of my research came at the end of the summer when the group traveled to Thailand to conduct field reconnaissance. Firsthand exposure to the tsunami-induced devastation was humbling.

However, when I saw new construction that used the design measures my research project was advocating, I was full of hope and inspired to help hazard-prone coastal communities build more sustainably.

I soon realized that the best way to accomplish this goal and obtain a better understanding of tsunami loading was through graduate work with Dan Cox at the Oregon State University (OSU) O.H. Hinsdale Wave Research Laboratory, part of the National Science Foundation’s Network for Earthquake Engineering Simulation, or NEES.

Due to its close proximity to the Cascadia Subduction Zone, there is a threat of an earthquake-generated tsunami off the Pacific Northwestern Coast of the United States.

Such a tsunami would give residents in coastal communities little time to evacuate to higher ground, so researchers at Oregon State University are investigating ways to improve tsunami preparedness by offering protection within the inundation zone.

Two approaches are the construction of vertical evacuation structures within the inundation zone, which can save lives by moving people above and out of harms way, and armoring communities with small seawalls, which can reduce tsunami forces on landward structures by deflecting an incoming wave skyward.

Currently, I am working on a large-scale experiment at OSU that allows me not only to operate a state-of-the-art wavemaker at one of the largest wave research facilities in the world, but also to be a part of a project that has direct impacts on society.{{ video="LS_091006_tsunami-life" title="Tsunami Maker" caption="A tsunami generated by a piston wavemaker travels across a flume, breaks and impacts a wall, causing it to collapse." }}

The goal of my master’s thesis project, “NEES-HouseSmash,” is to obtain a better understanding of wave loading and the failure modes of prototype wood and aluminum walls subjected to wave loading.

In simple terms, this is done by placing a test specimen, or a wall similar to what would be found in a coastal home, into the Large Wave Flume and smashing it with a tsunami wave (hence the name “HouseSmash”).

We have tested a variety of walls over a range of wave conditions, each time collecting data about the wave profile (the wave’s height and speed) and the wall’s reaction (force, pressure, and deflection from the incoming wave).

While this project has consisted of five different key experiments and generated more data than we know what to do with, I chose to begin by analyzing the data that can have the most direct impact on society. Our goal is to reduce structural damages and loss of life under a tsunami event.

One of our experiments found that small seawalls cause a skyward deflection of an incoming tsunami wave, which consequently reduces wave energy and the force on structures directly landward of the wall.

This finding is similar to observations in Thailand, where a seawall at Patong Beach caused a splash-up of the tsunami wave and buildings behind it only suffered modest structural damages. As seawalls are inexpensive and easy to build, they are a sustainable tsunami defense measure applicable for most coastal communities.

My current research is also investigating how tsunami forces change with distance from the shoreline. A further understanding of this relationship can help community planners establish setbacks and decide on the best location for high-priority buildings such as schools, hospitals and tsunami evacuation structures.

While very practical, this research is also quite technical in that the experimental data will be compared to numerical simulations, small-scale experiments and published theoretical models.

Through these comparisons we can not only test to see if our experimental data are accurate, but find the most effective and efficient way to model tsunami inundation and loading. Large scale experiments are costly, so if we know that computer simulations are accurate, that opens the door to a whole new range of research possibilities.

For more on the 10-week NSF Research Experiences for Undergraduates program where Oshnack helped survey damage from the 2004 tsunami, see the Notre Dame article “Exploring the life-saving aspects of engineering”.