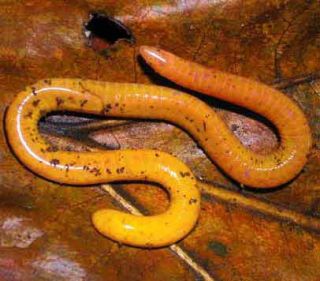 Legless amphibians called caecilians never see the light of day — or so scientists thought. Their oddly bright outfits, turns out, do have a purpose.
(Image: © G. John Measey)

Caecilians are legless tropical amphibians that live mostly underground. Yet some of them sport bright stripes or solids in shades of yellow, pink, or blue — surprising, since visual signals aren't much use in their dark tunnels.

The reason for such gaudy attire seems to lie in the recent observation that caecilians are not entirely subterranean, say Katharina C. Wollenberg of the Technical University of Braunschweig in Germany and G. John Measey of the South African National Biodiversity Institute.

Many species occasionally crawl on the surface during the day, an easier — though much riskier — alternative to underground travel. Wollenberg and Measey think that even sporadic appearances in daylight are enough to promote the evolution of conspicuous animal skin.

They base their assertion on a statistical correlation they discovered in more than thirty species of caecilians between colorful or patterned skin and a tendency, however small, to spend time on the surface.

Maybe the color and markings are good camouflage on certain terrains where caecilians prosper. They could also advertise the presence of toxins to potential predators — as they do in other amphibians. Whether caecilian skin actually harbors any toxins remains to be determined, but faking it is a useful Amphibia-class trick.

The findings are detailed in the Journal of Evolutionary Biology.