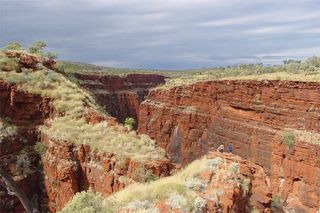 New findings reveal the importance of oxygen in the environment shortly before the deposition of this massive formation of iron oxide (rust) in the Hamersley Basin in Western Australia.
(Image: © A. D. Anbar, ASU)

Earth took its first breath of oxygen 50 to 100 million years earlier than previously thought, suggesting our planet and the life on it "co-evolved," new studies claim.

The two studies reveal that small amounts of oxygen were present in the oceans and possibly in the atmosphere around 2.5 billion years ago, indicating possibly that oxygen-producing microbes, such as cyanobacteria, were already pumping out this lung-filling ingredient, the researchers say.

Some scientists had thought the evolution of these organisms triggered the recorded surge in oxygen on Earth called the Great Oxidation Event between 2.3 billion and 2.4 billion years ago. Why did it take up to 100 million years between the initial puffs of atmospheric oxygen and the Oxidation Event?

Because nature is not so simple. The authors suggest a complex and interdependent dance between biological and geological processes can explain the gap. "It becomes a co-evolutionary dance or interplay," said Ariel Anbar, a biogeochemist at Arizona State University and lead author of one of the studies.

An outside scientist not involved in either study, Carl Pilcher, director of the NASA Astrobiology Institute, expanded on the idea of an intricate link between life and the planet. "Studying the dynamics that gave rise to the presence of oxygen in Earth’s atmosphere deepens our appreciation of the complex interaction between biology and geochemistry,” Pilcher said. The new results "support the idea that our planet and the life on it evolved together.”

Both studies are detailed in the Sept. 28 issue of the journal Science.

The history of life on Earth is closely tied to the emergence of oxygen in the atmosphere. However, until now, little was known of environmental changes before the Oxidation Event.

To get at that, both research teams analyzed layers of rock in a 3,000-foot-long (914 meters) core drilled from the Hamersley Basin in Western Australia. They examined chemicals whose presence is linked with oxygen, including sulfur compounds and metals like molybdenum and rhenium.

They found evidence that there was a small but significant amount of oxygen present in the oceans and possibly Earth's atmosphere just prior to the end of the Archean Eon (about 3.9 billion to 2.5 billion years ago), when microbial life on Earth is thought to have arisen and diversified.

"Together, these [studies] provide compelling evidence for a shift in the oxidation state of the surface ocean 50 million years before the Great Oxidation Event," said Alan Jay Kaufman, a geochemist at the University of Maryland and lead author of the second new study. "We believe that these findings are a significant step in our understanding of the oxygenation of Earth because they link changes in the environment with that of the biosphere."

The newly discovered "whiff" of oxygen didn't just appear out of nowhere.

"The data show that oxygen existed in the environment before the Great Oxidation Event and strongly suggests that photosynthesis that produced oxygen was around before then," Anbar told LiveScience.

Other phenomena, however, could also explain the findings, said Andrey Bekker of the Carnegie Institution of Washington.

Bekker, who was not involved in either of the current studies, notes that photochemical processes, in which chemical reactions are driven by different wavelengths of light, can lead to changes in the relative amounts of different forms of sulfur, for instance.

If the biological interpretation is correct, some process must have kept the oxygen being produced in check for millions of years, up until the Great Oxidation Event. "Why didn't oxygen rise in the atmosphere as soon as that metabolism evolved?" Anbar said.

Anbar suggests non-biological processes could play a role. "There are geological processes that consume oxygen, so even when biology is pumping it into the environment it doesn't necessarily rise strongly in the atmosphere right away," Anbar said.

Some gases spewed from different types of volcanoes can consume oxygen, and so as volcanic activity changed over time so would the amount of oxygen in the environment.