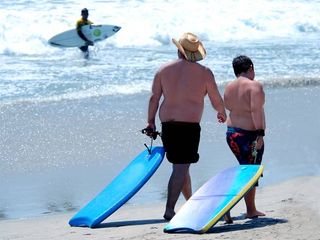 During adulthood, our bodies tightly regulate the number of fat cells, which could explain why it seems easy to gain back lost weight.
(Image: © Dreamstime.com.)

Men who are obese at age 20 die about eight years earlier than other men, a new study in Denmark suggests.

Researchers tracked more than 5,000 men starting at the age of 20 until up to age 80. They found that at any given age, an obese man was twice as likely to die as a man who was not obese, and that obesity at age 20 appeared to be a constant factor  in death rates up to 60 years later.

"As the obesity epidemic is still progressing rapidly, especially among children and adolescents, it is important to find out if obesity in early adulthood has lifelong mortality effects," said the study's leader, Esther Zimmermann, a researcher at the Institute of Preventive Medicine, Copenhagen University Hospital and the Institute of Biomedical Sciences at the University of Copenhagen.

Zimmermann told LiveScience she isn't sure whether the results would hold for Americans, but that a recent study in Sweden echoed her study results. The study will be presented Tuesday at the International Congress on Obesity in Stockholm.

Zimmermann and her colleagues compared mortality among military draftees, including 1,930 obese men and a random sample of 3,601 non-obese men. (Zimmermann said she wasn't sure which men actually were accepted into the military.) They looked at participants' body mass index, or BMI, at the average ages of 20, 35 and 46 and then matched the results with death rates in the next follow-up period.

BMI is an indicator of body fat calculated from height and weight. According  to the National Heart, Lung, and Blood Institute, a BMI below 18.5 means the person is  underweight; between 18.5 and 24.9 is considered normal; 25 to 29,  overweight; and anything higher, obese.

The results were adjusted to eliminate any influence on the findings from year of birth, education and smoking.

A total of 1,191 men died during the follow-up period of up to 60 years. Of the survivors at age 70, about 70 percent had not been  obese at age 20. Though the other 70-year-old survivors had been obese, just as many obese men had died by then.

Results showed men with  a BMI of 25 at age 20 had the lowest death risk. Underweight men had a slightly elevated risk, and the risk of early death crept up steadily by 10 percent for each BMI unit above 25.

Zimmermann said it is unclear whether the higher death risk was a result of being obese at age 20 or of remaining obese for many years afterward.

"More than 70 percent of the obese young men were still obese at the follow-up examinations, whereas only 4 percent of the men in comparison group developed obesity during follow-up," Zimmermann said. "Obesity seems to be a persistent condition, and it appears that if it has not occurred in men by the age of 20, the chance[s] of it developing later are quite low."

Zimmermann said her group planned to study what diseases might be responsible for the early deaths in the obese group. She suspects the known obesity-linked diseases played a role, including cardiovascular diseases, endocrine disorders and some cancers. In addition, looking at these diseases over time could shed some light on the mechanisms through which obesity works at different ages.

Her study was funded by grants from the Cluster for Endocrinology and Metabolism at the University of Copenhagen.