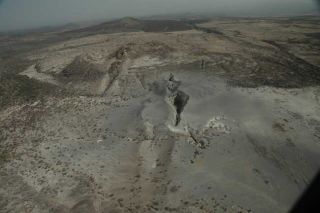 The rift in Afar, Ethiopia, that researchers say will eventually become a new ocean.
(Image: © University of Rochester)

Lake Tanganyika, the second oldest and the second-deepest lake in the world, is warmer than it has been in more than 1,500 years, a new analysis released today finds.

The east African rift lake has experienced unprecedented warming during the last century, and its surface waters are the warmest on record. The warmer waters are linked to a decrease in the lake's productivity, likely affecting fish stocks upon which millions of people in the region depend, the study found.

Researchers took core samples from the lakebed that laid out a 1,500-year history of the lake's surface temperature, the first record of temperature variability for the lake over this time span. The rift is part of a giant crack in Africa that will eventually create a new ocean.

A high average temperature of 78.8 degrees Fahrenheit (26 degrees Celsius), measured in 2003, is the warmest the lake has been in that millennium and a half. Lake Tanganyika also experienced its biggest temperature change in the 20th century, which has affected its unique ecosystem that relies upon the natural conveyance of nutrients from the depths to jumpstart the food chain upon which the fish survive.

"Our data show a consistent relationship between lake surface temperature and productivity (such as fish stocks)," said geologist Jessica Tierney of Brown University."As the lake gets warmer we expect productivity to decline, and we expect that it will affect the fishing industry."

Warming causes productivity in the lake to decline because it creates stark differences in water density — the water at the surface become much warmer than the water at depth, and cold water is denser than warm water. The warmer, less dense surface waters are less likely to overturn and mix with the cooler waters below, so it becomes more difficult for winds to churn the water and cycle nutrients and oxygen between the lake's surface and depths.

An estimated 10 million people live near the lake, and fishing is a crucial component for the region's diet and livelihood: Up to 200,000 tons of sardines and four other fish species are harvested annually from Lake Tanganyika, a haul that makes up a significant portion of local residents' diets, according to a 2001 report by the Lake Tanganyika Biodiversity Project.

Lake Tanganyika is bordered by Burundi, the Democratic Republic of Congo, Tanzania, and Zambia — four of the poorest countries in the world, according to the United Nations Human Development Index.