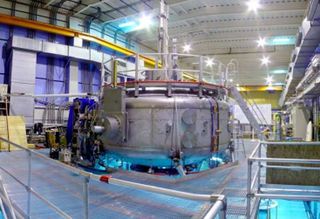 The Levitated Dipole Experiment (LDX) reactor is housed inside a 16-foot-diameter steel structure in a building on the MIT campus that also houses MIT’s other fusion reactor, a tokamak called Alcator C-mod.
(Image: © LDX team)

Physicists may be one step closer to achieving a form of clean energy known as nuclear fusion, which is what happens deep inside the cores of stars.

A recent experiment with a giant levitating magnet was able to coax matter in the lab to extremely high densities — a necessary step for nuclear fusion.

When the density is high enough, atomic nuclei — the protons and neutrons of atoms — literally fuse together, creating a heavier element. And if the conditions are right that fusion can release loads of energy.

Depending on the mass of this element, energy could be created by fusion without any greenhouse gas emissions. So it could present a tantalizing clean power source, if scientists could achieve it.

Such a power source would produce far less radioactive waste than current nuclear energy plants, which involve splitting atoms apart — called fission — the opposite of fusion.

For the new study scientists built a Levitated Dipole Experiment, or LDX, which involves suspending a giant donut-shaped magnet in midair using an electromagnetic field.

The magnet weighs about a half ton, and is made of superconducting wire coiled inside a stainless steel container about the size and shape of a large truck tire. The researchers used the magnet to control the motion of an extremely hot gas of charged particles, called a plasma, contained within its outer chamber.

The donut magnet creates a turbulence that causes the plasma to condense, instead of becoming more spread out, as usually happens with turbulence. Such "turbulent pinching" has been observed with space plasma in the magnetic fields of Earth and Jupiter, but never before in the lab.

The approach "could produce an alternative path to fusion," said co-leader Jay Kesner of MIT. Though to actually reach the density levels needed for fusion, scientists would have to build a much larger version of the experiment.

A key to the device is the fact that the LDX magnet is levitating, rather than suspended by any struts, because the magnetic field used to confine the plasma would be disturbed by any objects in its way.

In the experiment, the donut magnet was held aloft by a magnetic field from an electromagnet overhead, which is controlled by a computer based on readings from laser beam sensors. This set-up can adjust the position of the giant magnet to within half a millimeter.

Just in case the magnetic levitating system fails, the experiment included a cone-shaped support with springs underneath the magnet to catch it if need be.

The researchers detailed their findings this week in the journal Nature Physics.