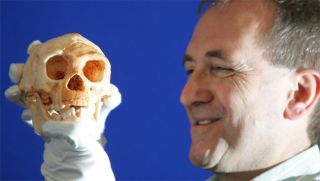 Professor Chris Stringer, Head of Human Origins at London's Natural History Museum, holds a cast taken from a skull that is said to be that of a new species in the evolution of man named 'Homo Floresiensis', during a news conference in London, Wednesday Oct. 27, 2004. (AP Photo/Richard Lewis)

WASHINGTON (AP)—The surprising discovery of bones heralded as a new, hobbit-like human species may turn out to have simply been the remains of a human suffering from a genetic illness that causes the body and brain to shrink, according to researchers challenging the original report.

The bones were discovered in 2003 on the Indonesian island of Flores and caused a stir in the scientific community when researchers declared they represented a new, dwarf, species which they named Homo floresiensis.

Because of its tiny stature it was quickly dubbed the "Hobbit,'' from the creature in the books by J.R.R. Tolkien.

Some scientists questioned whether it was really a new species, however, and Robert D. Martin of the Field Museum in Chicago and co-authors challenge the original classification in a technical comment appearing in Friday's issue of the journal Science.

They say that, instead, it appears to be a modern human suffering from microencephaly, a genetic disorder that results in small brain size and other defects. Other researchers also have proposed this explanation.

Martin argues that the brain of the specimen, known as LB1, is far too small to merely be a dwarf species. It's brain size of 400 cubic centimeters would indicate a creature only one foot tall, one-third the size of the actual skeleton.

In addition, sophisticated stone tools have been found at the site, he reports, of a type only associated with modern humans, which could have reached the island by the time LB1 lived about 18,000 years ago.

And they contended that evidence to rule out a microencephalic was flawed because the original researchers compared LB1 to the brain of a juvenile microencephalic, not an adult.

In a response to their paper, researchers led by Dean Falk of Florida State University called Martin's assertions "unsubstantiated.'' Martin's comparison of LB1 with the skulls of microcephalics lacks crucial details, Falk stated.

Falk also challenged Martin's comment that such a small brain size would indicate an extremely tiny creature based on the calculations for dwarf versions of other animals. It would be surprising if the dwarf version of an early human scaled down in the same way as an elephant, for example, Falk responded.

Falk and his co-authors argued that the size of LB1's brain is consistent with that of adult microencephalics.

Previous stories on the 'Hobbit'