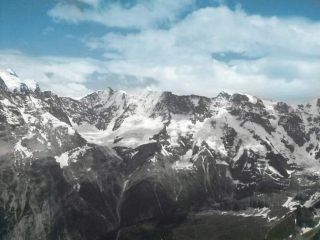 Ain't no mountain high enough for climate change, suggests a new model that predicts that by 2100 the peaks of Alaska will have only 64 percent of the snow pack that existed in the year 2000.

The new global climate model simulated snow cover on the world's mountain ranges from 1977 to 2100 and found that by the end of this century mountains in Europe and the U.S. will lose nearly half of their snow-bound water.

The Andes in South America will suffer a similar fate and snowcapped peaks in New Zealand will vanish completely, the model predicts.

Such declines in winter snow pack means that people who rely on the melting of snow for drinking, irrigation, and farming will greatly suffer, researchers said today.

What to expect: No wind? No rain? Nor winter cold?

Hardest hit will be mountains in temperate zones, where temperatures remain below freezing only at increasingly higher elevations, said Steven J. Ghan, staff scientist at the Department of Energy's Pacific Northwest National Laboratory.

The European Alps will have 61 percent of their 2000 snow pack and Scandinavia will keep 56 percent.

The current model differs from past attempts because it generates snow information for 3-mile grids (5 kilometers) on mountains ranges over a longer period than other work, Ghan explained.

"Global climate models have never been run at 5 kilometers resolution for a period covering more than a couple of months," Ghan said, "even on the biggest computers in the world."

This new model can run century-long simulations on a relatively modest computer over a few weeks. But it does have significant limitations. Field observations, which predict that the snowcaps of East Africa's Mount Kilimanjaro will be gone within decades and Greenland is heading for accelerated snow and ice melt, don't show up in the new model, Ghan said.

"That doesn't mean Kilimanjaro and Greenland aren't in trouble," he said. "But our model doesn't account for all of the snow loss that is possible. Our model neglects downward flow of snow by avalanches and snow slides, glacial creep in places where snowfall is heavy and the snow doesn't have time to melt."

The results are presented in current issue of the Journal of Climate.