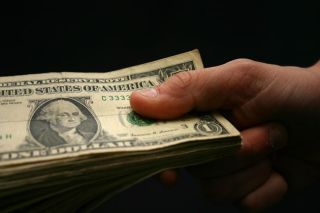 Through six experiments, psychologists and a marketing professor probed the power of money as a proxy for social acceptance. Among their results, they found that merely touching bills or thinking about expenses paid affected the participants both physically and emotionally.

Because it affects pain, money may be a clue to how the brain evolved to process social interactions, the researchers wrote in a paper published in the June edition of the journal Psychological Science.

In one experiment, 84 undergraduate student volunteers were divided into two groups and asked to take a "finger-dexterity test." One group counted 80 $100 bills from a stack, the other group counted paper. Afterward, the volunteers played Cyberball, a computer game in which four players passed a ball to each other. They were told that they were playing with three real people, but in fact a computer simulated the other players. In half of the games, all the players received the ball an equal number of times, but the other half was rigged against the human players, excluding them after 10 passes.

To test money’s effect on physical pain, 96 recruits were split into two groups and counted either money or paper. Then an assistant strapped down their left hands and dipped their fingers in hot water with a temperature of 122 degrees Fahrenheit (50 degrees Celsius). On average, those who counted money rated their pain lower than those who counted paper.

The scientists wondered if money may have just been a distraction that took the volunteers' minds off their pain, so they repeated the experiments, but this time without the bills. Instead, they asked half of the participants to write about their expenses in the past month and the other half wrote about the weather. Then they either played Cyberball or dipped their fingers in hot water. Simply writing about spent money caused social distress, the participants reported. And it intensified the pain of the hot water and the social snub of rigged Cyberball.

"These effects speak to the power of money, even as a symbol, to change perceptions of very real feelings," like pain, said Kathleen Vohs, a marketing professor at the University of Minnesota and co-author of the study.

The results prop up earlier studies showing that money's effect on our emotions stems from its symbolic power in social interactions, the researchers wrote. It stands in for acceptance and popularity, and allows those who have it to get what they want from the vast social network on which we depend — regardless of whether they are well liked or not.

Its physical effects may be tied up in the early evolution of those social interactions. Earlier research by psychologists Geoff MacDonald at the University of Toronto and Mark Leary at Duke University has showed a link between psychological pain and physical pain. The emerging hypothesis is that early in the evolution of social interactions, our brains took a shortcut to handle the new system: instead of laying down new biological hardware to process things like relationships and culture, human brains hacked their older hardware that deals with physical pain and gave it the double duty of handling social interactions.

Two final experiments in the study suggested that people who feel rejected or physically hurt have a higher desire for money than those who don't. The results dovetail with work by University of Rochester psychologist Edward Deci, he said. Deci has written about well-being and the pursuit of different kinds of goals.

"People want money more and are soothed by it when they are not experiencing deeper need satisfaction, but the satisfaction of money is superficial and is not enduring," Deci said.

These results could help explain some puzzles about money, said the study’s lead author, Xinyue Zhou, a psychologist at Sun Yat-Sen University in Guangzhou, China. He said it could lead to a clearer picture of how people become addicted to making money. And his work justifies court-ordered financial compensation to victims of battery, he said. If money is linked to physical pain, then making attackers pay their victims is a punishment that suits the crime, he said.