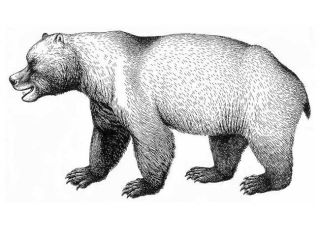 Enormous cave bears that once inhabited Europe were the first of the mega-mammals to die out, going extinct around 13 millennia earlier than was previously thought, according to a new estimate. Why'd they go? In part because they were vegetarians. The new extinction date, 27,800 years ago, coincides with a period of significant climate change, known as the Last Glacial Maximum, when a marked cooling in temperature resulted in a reduction or total loss of the vegetation that the cave bears ate (today’s brown bears are omnivores). The loss of this food supply led to the extinction of the cave bear, Ursus spelaeus, one of a group of "megafauna" — including the woolly mammoth, woolly rhinoceros, giant deer and cave lion — to disappear during the last Ice Age, the researchers wrote in a research paper published online Nov. 26 in the journal Boreas. Mysterious disappearance Over the years, numerous cave bear remains have been discovered in caves where the animals probably died during winter hibernation. Cave bears were huge, with males growing up to around 2,200 pounds (1,000 kg). The maximum recorded weight of both Kodiak bears and polar bears — the largest bears living today — is 1,760 pounds (800 kg), with averages of around 1,100 pounds (500 kg). During the Middle Ages, the bones of cave bears, thought to be the remains of dragons, were collected and used for medicine, the researchers say. The question of what caused cave bears, woolly mammoths and the other large mammals to go extinct has been a mystery. Some researchers think humans hunted the mega-mammals to extinction, but researcher Martina Pacher of the University of Vienna and her colleague Anthony J. Stuart of the Natural History Museum, London, found no convincing evidence for this idea regarding cave bears. Another theory is that some virus or bacteria could have sickened populations of mega-mammals, but Pacher and Stuart think such a "hyperdisease" is unlikely to explain the timing of the extinctions or the fact that body sizes of the dying-out animals varied so much. 'One of the earliest to disappear' Pacher used new data and existing records of radiocarbon dating on cave bear remains to construct the new chronology for cave bear extinction that supports the climate change scenario. "Our work shows that the cave bear, among the megafauna that became extinct during the Last Glacial period in Europe, was one of the earliest to disappear," Pacher said. "Other, later extinctions happened at different times within the last 15,000 years." Many scientists previously claimed that cave bears survived until at least 15,000 years ago, but the methodology of these earlier studies included errors in dating as well as confusion between cave bear and brown bear remains, Pacher and Stuart say, so they excluded those data from the analysis. Pacher and Stuart also concluded, from evidence on skull anatomy, bone collagen and teeth, that these extinct mammals were predominantly vegetarian, eating a specialized diet of high-quality plants. Compared with other megafaunal species that would also become extinct, the cave bear had a relatively restricted geographical range, being confined to Europe (ranging from Spain to the Ural Mountains in Russia), which may offer an explanation as to why it died out so much earlier than the rest. "Its highly specialized mode of life, especially a diet of high-quality plants, and its restricted distribution left it vulnerable to extinction as the climate cooled and its food source diminished," Pacher said. Why did the brown bear survive? The brown bear, with which Ursus spelaeus shares a common ancestor, was spread throughout Europe and much of northern Asia and has survived to the present day. "A fundamental question to be answered by future research is: why did the brown bear survive to the present day, while the cave bear did not?" Stuart said. Answers to this question may involve different dietary preferences, hibernation strategies, geographical ranges, habitat preferences and perhaps predation by humans. Despite more than 200 years of scientific study — beginning in 1794 when anatomist Johann Rosenmüller first described bones from the Zoolithenhöhle in Bavaria as belonging to a new extinct species, which he called cave bear — the timing and cause of its extinction remain controversial. The research was funded by Natural Environment Research Council UK, the Cultural Grant of Lower Austria and the EU project: AlpiNet Culture 2000.