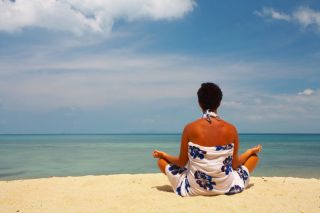 If you name your emotions, you can tame them, according to new research that suggests why meditation works.

Brain scans show that putting negative emotions into words calms the brain's emotion center. That could explain meditation’s purported emotional benefits, because people who meditate often label their negative emotions in an effort to “let them go.”

Psychologists have long believed that people who talk about their feelings have more control over them, but they don't know why it works.

UCLA psychologist Matthew Lieberman and his colleagues hooked 30 people up to functional magnetic resonance imaging (fMRI) machines, which scan the brain to reveal which parts are active and inactive at any given moment.

They asked the subjects to look at pictures of male or female faces making emotional expressions. Below some of the photos was a choice of words describing the emotion—such as “angry” or “fearful”—or two possible names for the people in the pictures, one male name and one female name.

When presented with these choices, the subjects were asked to pick the most appropriate emotion or gender-appropriate name to fit the face they saw.

When the participants chose labels for the negative emotions, activity in the right ventrolateral prefrontal cortex region—an area associated with thinking in words about emotional experiences—became more active, whereas activity in the amygdala, a brain region involved in emotional processing, was calmed.

By contrast, when the subjects picked appropriate names for the faces, the brain scans revealed none of these changes—indicating that only emotional labeling makes a difference.

“In the same way you hit the brake when you’re driving when you see a yellow light, when you put feelings into words, you seem to be hitting the brakes on your emotional responses,” Lieberman said of his study, which is detailed in the current issue of Psychological Science.

In a second experiment, 27 of the same subjects completed questionnaires to determine how “mindful” they are.

Meditation and other “mindfulness” techniques are designed to help people pay more attention to their present emotions, thoughts and sensations without reacting strongly to them. Meditators often acknowledge and name their negative emotions in order to “let them go.”

When the team compared brain scans from subjects who had more mindful dispositions to those from subjects who were less mindful, they found a stark difference—the mindful subjects experienced greater activation in the right ventrolateral prefrontral cortex and a greater calming effect in the amygdala after labeling their emotions.

“These findings may help explain the beneficial health effects of mindfulness meditation, and suggest, for the first time, an underlying reason why mindfulness meditation programs improve mood and health,” said David Creswell, a UCLA psychologist who led the second part of the study, which will be detailed in Psychosomatic Medicine.