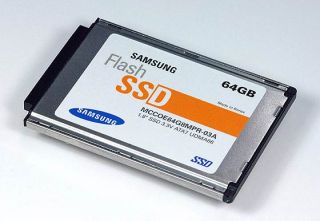 The hard drive of the future? A solid-state drive from Samsung.
(Image: © Samsung)

The day appears to be dawning when you don’t have to treat your laptop as if it contained raw eggs, thanks to technology called solid-state drives (SSDs) that will replace hard drives and their spinning discs with banks of flash memory chips.

Units have appeared on the market recently from vendors like Samsung and SanDisk, in sizes ranging from 4 to 32 gigabytes, packaged so that they plug into disk drive slots. (Samsung has announced a 64-gigabyte unit to be available by summer.)

So far, none are sold through retail channels, but market research firm Gartner Inc. has issued a report estimating that global consumption of SSDs will increase by a factor of eight in the next three years, rising from 4 million this year to 32 million in 2010. Samsung has announced even more optimistic projections, expecting sales to grow by a compound annual rate exceeding 200 percent through 2010.

You probably associate flash drives with USB memory sticks, which are not only slow but subject to their own form of Sudden Death Syndrome. But the new solid-state flash drives use a different form of flash memory, industry analyst Rob Enderle explained to LiveScience.

“Their speed used to be 20 percent faster than magnetic media, but now it’s two to four times faster,” said Enderle, head of the Enderle Group in San Jose, CA. Meanwhile, each flash memory cell can only change state so many times before wearing out, but the new drives make sure that the same cells aren’t used over and over, with repetitive actions being relegated to RAM, he added.

The speed is such that SanDisk claims that a portable computer using one of its SSDs can boot the Microsoft Vista Enterprise operating system in 30 seconds, where a mechanical drive would take 48 seconds.

Additionally, SSDs don’t make any noise, emit little heat, and consume on average about half the wattage that mechanical drives consume.

But the big news—for all those laptops users who gingerly ease their machine onto the desk when setting it up—is durability.

Samsung claims that its SSDs can survive shocks about six times more powerful than hard drives can survive, and about 20 times more vibration. SanDisk calculates that the average life span of its SSDs is two million hours, or six times more than a mechanical hard drive. Meanwhile, hard drive failure is the cause of 25 to 45 percent of all laptop deaths, Gartner estimates.

Fujitsu has come out with a version of its portable Lifebook computer using an SSD. A unit with a 32 GB SSD costs $1,200 more than a unit with a standard hard drive. However, so far it is available only through volume purchases to institutional customers.