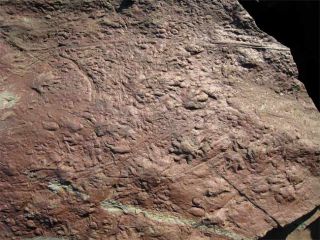 A tiny reptile scampering along an Outback-like environment snagging insects some 318 million years ago left behind footprints that are now the oldest evidence of reptiles to date.

From the size of the tracks, the researchers suggest the animal was about the size of a gecko, nearly 8 inches (20 centimeters) from snout to tail tip. "This is the earliest evidence we've got for reptiles," said Howard Falcon-Lang of Royal Holloway, University of London. [image of fossil tracks]

Falcon-Lang discovered the tracks by accident when he was climbing the steep sea cliffs along the Bay of Fundy in New Brunswick and tripped. "I landed on the ancient boulder and looked up and there were the trackways on the boulder next to me and I still have the scars to prove it," Falcon-Lang said.

The prints showed the animal had five slender toes on each of its "hands," which is a hallmark of reptiles, Falcon-Lang said, adding that amphibians sport four stubby toes.

By studying the sediments where the prints were found, the researchers learned the little reptiles were likely scurrying around a contracting watering hole. "We think it was like the Outback today with watering holes on a dry landscape," Falcon-Lang said.

When the reptile lived, the Earth's continents were connected into the supercontinent Pangea. As such, the gecko-like beast lived some 310 miles (500 kilometers) from the sea.

There were animals living on land before these reptiles, but they were amphibians "clinging to the edge of the continent in swampy wetlands," Falcon-Lang said.

"Before reptiles there were amphibians, frog-like animals, but frogs have to return to ponds in order to lay spawn to reproduce," Falcon-Lang told LiveScience. "When reptiles came onto the scene they had an advantage in that they laid eggs with hard shells so they could lay their eggs on land."