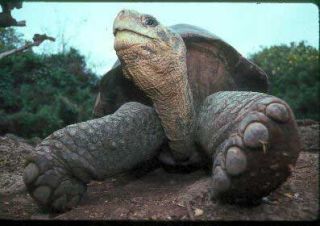 The giant tortoises of the Galapagos can weigh in at over 660 pounds.
(Image: © Joe McDonald, Clyde Peeling's Reptiland.)

In a move that some are questioning, the Galapagos Islands have been removed from the World Heritage Committee's (WHC) list of Sites in Danger, a decision that came late Wednesday during the committee's annual meeting.

The Galapagos Islands, a tiny Pacific Ocean archipelago 600 miles (1,000 kilometers) west of South America, are home to an astounding array of unusual animal life, from famed giant tortoises to marine iguanas to the finches that served as inspiration for Charles Darwin's theory of natural selection. Many of the Galapagos species are found nowhere else in the world.

The proposal to remove the Ecuadorian archipelago from the danger list was introduced by Brazil. In all, 15 of the 21 WHC member states voted in favor of the move, among them France, Mexico, Jordan, South Africa and Barbados.

The decision goes against the recommendations of UNESCO, the United Nations body that, along with outside experts and scientists, monitors sites on the WHC's danger list.

"The state of conservation report presented by UNESCO did not suggest that the site should be removed from the danger list, that was a decision the committee made," said Sue Williams, a UNESCO spokesperson, who said the WHC members are government representatives, free to accept or reject UNESCO's recommendations.

"They're free to make up their own minds," she told OurAmazingPlanet.

Edwin Naula, director of the Galapagos National Park and member of the Ecuadorian delegation to this year's WHC meeting, said the archipelago's removal from the list will only reinforce efforts to maintain the islands' sustainability.

However, some conservation organizations question the relatively swift change in the site's designation. The islands were only added to the danger list in 2007, at the behest of Ecuadorian President Rafael Correa.

"It's a recent inscription," Badman said in a phone interview. "We expected the time to be taken to deal with all the issues that have been raised. There's still work to be done to manage bio-security on the island, tourism activity, and governance of this site."

Johannah Barry, president of the Galapagos Conservancy, acknowledged that President Correa has made some inroads against the myriad problems facing the island, but said removing the area from the danger list delivers a false impression of safety.

"I'm concerned it might appear like everything's all better now," Barry said, "and I don't believe that's the case."

Barry cited the alarming influx of alien plants, animals and diseases in recent years, from West Nile virus and parasitic flies that are killing off the islands' finches, to domestic dogs and cats that maim and kill the archipelago's marine iguanas.

Invasive species "are the biggest threat to the Galapagos's biodiversity," Barry said.

"It used to be you could count the number of cars," Barry said. That's not the case anymore.

"Just because it has come off the list doesn't mean UNESCO doesn't pay attention to it anymore," Williams said. "If there's a deterioration of the situation, it could very well be the site could be re-inscribed on the list."

The Galapagos Islands remain a World Heritage Site – they were the first spot to ever receive the designation, in 1978.

The WHC will continue to announce newly added World Heritage Sites over the next several days, before its meeting concludes early next week. It is unknown whether any additional sites will be removed from its danger list.

This article was provided by OurAmazingPlanet, sister site to LiveScience.