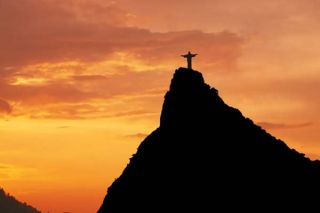 Lightning Safety Week, a public awareness campaign from the National Weather Service, ended a few days ago. The goal was to educate the public about the dangers of lightning, and that point was driven home earlier this month when a six-story statue of Jesus north of Cincinnati was struck by lightning. The statue, which depicted Jesus raising his hands to heaven, was burned to a crisp, leaving nothing but charred metal and blackened foam detritus.

The lightning strike made national news because of its inherent irony, but it was hardly the first time that Jesus was hit by a bolt from the blue. The world's most famous statue of Jesus, Brazil's 130-foot "Christ the Redeemer" figure atop Rio de Janeiro's Sugarloaf Mountain, has been struck by lightning several times, most recently in 2008 when a bolt from the heavens struck Jesus' face and fingers.

Lightning has long been associated with the gods; Greek mythology shows lightning as the chief weapon of Zeus, King of the Gods. Zeus was often depicted with lightning bolts in his hands, ready to strike down people and buildings that displeased him.

Some modern religious leaders believe that Acts of God (a legal, not theological, term) are divine retribution for mankind's wickedness and immorality. For example, Rev. Pat Robertson famously stated that the earthquake that devastated Haiti in January of this year was God's vengeance on the wicked people of that island. He also said that Hurricane Katrina was brought about by God's displeasure with American abortion laws.

While Robertson and many others see signs of God's will in natural disasters, science has another take on it. The real answer as to why Jesus statues, churches, and other religious buildings and monuments are often struck by lightning is simply that they reach high into the sky. When lightning strikes, it seeks the highest point in the area to discharge (that's why you should never take shelter under trees); neither churches, nor mosques, nor synagogues, nor the son of God are exempt.

Of course, secular objects are often struck by lightning. Airplanes are struck by lightning frequently. The Statue of Liberty and the Empire State Building take their hits. In a way, you could say that lightning bolts are nature's retribution for the sin of vanity, since anyone who erects the tallest structure in the area surely has no shortage of pride.