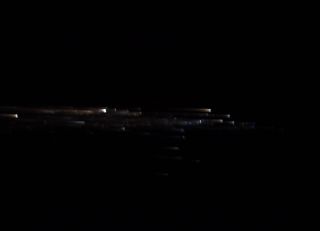 So long, Progress 72, and thanks for all the stuff.

The Russian-built Progress cargo ship went down in flames (on purpose) on Monday (July 29) and a space station astronaut made sure to capture its fiery doom on camera.

"Said goodbye to Progress 72 today to make room for 73P showing up on Wednesday. Caught this shot of it during reentry," NASA astronaut Nick Hague wrote on Twitter Monday. "It looked like a big firework that lasted minutes — flickering, sparking, and pulsing with brightness before it faded into the darkness."

"It will reenter the Earth's atmosphere loaded with trash and discarded gear for a fiery, but safe disposal over the Pacific Ocean," NASA officials wrote in a status update Monday.

And reenter Progress 72 did.

As Hague's photo shows, the disposable spacecraft broke apart into a shower of bits as it burned up in Earth's atmosphere. The cosmic funeral pyre marked the end of a delivery mission that began with an April 4 launch to the station.

A Russian Soyuz rocket is scheduled to launch Progress 73 from the Baikonur Cosmodrome in Kazakhstan on Wednesday (July 31) at 8:10 a.m. EDT (1210 GMT). The mission comes less than a week after the arrival of a SpaceX Dragon cargo ship at the station. That mission launched into orbit Thursday (July 25) and arrived on Saturday (July 27).

Progress 73 is expected to deliver nearly 3 tons of supplies to the space station at 11:35 a.m. EDT (1535 GMT) after making just two orbits around Earth in a super-fast flight. It will stay at the station until December, when it will also depart to burn up in Earth's atmosphere.

Russia's Progress spacecraft are workhorse vehicles that look similar to the crewed Soyuz vehicles used by Roscosmos, the country's space agency, to ferry crews to and from the International Space Station. But instead of a crew capsule, Progress vehicles carry propellant, experiments and other much-needed supplies to keep astronauts and cosmonauts well stocked.