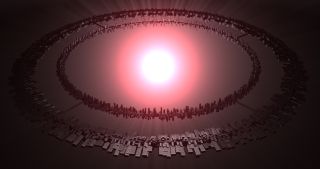 Will humans ever make contact with an advanced alien civilization?
(Image: © Shutterstock)

The quest to identify UFOs and even find intelligent life on other worlds has been heating up for decades ... to no avail. But there are still plenty of spots and wavelengths where aliens could be hiding. So, what would humans do if we found concrete evidence that we are not alone in the universe? Turns out, there's no real plan for how humanity would respond, let alone how we would deal with such a monumental discovery.

The U.K. SETI Research Network (UKSRN) wants to change that by asking Earthlings their views on the search for aliens and how they'd react to a discovery. The network announced the survey, which it said is the largest such survey to date, yesterday (July 1) during the Royal Society's Summer Science Exhibition, according to The Guardian. [Greetings, Earthlings! 8 Ways Aliens Could Contact Us]

The online survey includes questions such as:

If we discover a signal from extraterrestrial intelligence, would you:

— Not care much about it? — Just follow the news, comment? — Interact on social media about this topic?

And this one: Some people think we should send messages into space even if we don't receive a message first. What is your opinion?

— This is a bad idea. We should ban people from sending messages. — There should be rules or laws about who can send messages and what they can say. — Anybody who wants to send a message into space should be allowed to do so.

So, what are the odds we'd really need answers to these questions? To date, a lot of effort and money have gone into listening for alien signals. For instance, Breakthrough Listen's team at the University of California, Berkeley's SETI Research Center released 1 million gigabytes of data related to such a quest. The scientists had looked for anomalous pings in both radio and optical wavelengths emitted by 1,327 star systems. The result? None of those signals could be traced to anything other than human sources.

Just this month, the Mutual UFO Network (MUFON) celebrated 50 years of looking for and studying UFO phenomenon. The nonprofit relies on volunteers to help find and identify these objects. Though the members insist that "we are not alone," they have yet to spot conclusive evidence to support that claim.

Even the U.S. government has suggested it's serious about investigating bizarre craft of unknown origin. In 2017, the Pentagon confirmed that a secret "UFO" office — called the Advanced Aerospace Threat Identification Program — had spent $22 million over five years to study such baffling aeronautical reports. And even though funding ended in 2012, the program apparently remained alive.

"Despite the fact that we [have] never detected a signal from extraterrestrial intelligence, this does not mean that it is never going to happen. What if it does?" Martin Dominik, an astrophysicist at the University of St. Andrews in the United Kingdom, told Live Science in an email.

"The SETI community are currently rethinking this issue in the wake of the spread of social media and fake news. If there are consequences for the wider public, the decision about where to go becomes a political one rather than a scientific one," said Dominik, who is also a UKSRN member.

What have researchers learned so far from the survey responses?

"I do not want to release any data at this moment, because it would bias the views of those who are still to respond," Dominik said.

Check out the survey and let the SETI group know what you'd do upon contact with extraterrestrial intelligence.