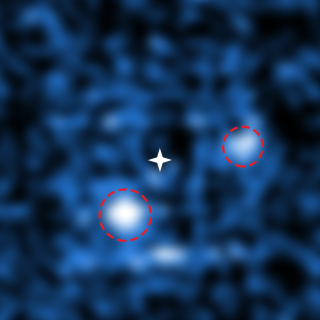 To capture this image, researchers at the Very Large Telescope carefully filtered the light from the central star. PDS 70b is visible at the lower left and PDS 70 c is visible at the upper right.
(Image: © ESO and S. Haffert (Leiden Observatory))

When stars are young, they're shrouded in wide, flattened circles of matter. Astronomers call these features "protoplanetary disks," because it's their dust and gas that bunches up into the balls that ultimately become planets. Researchers have long suspected that "protoplanets" — half-baked worlds within those disks — might carve wide gaps in the seas of loose material that telescopes might be able to spot.

Now, that theory seems confirmed, with two planets discovered in the gaps in a disk around PDS 70, a smallish star in the constellation Centaurus, located 370 light-years from Earth.

PDS 70 is a relatively new star in our galaxy, having formed some 6 million years ago. (For comparison, our sun is about 4.5 billion years old.) And the alien star is still surrounded by a disk that astronomers can spot through telescopes.

That disk has a big gap in it, a spot devoid of dust and gas that's visible to humanity's most advanced telescopes, such as ALMA, an array of radio telescopes in the Atacama Desert, and the Hubble Space Telescope. PDS 70's disk extends from 1.9 billion miles out from the star (3.1 billion kilometers) — a bit closer to the star than where Uranus orbits the sun — to 3.8 billion miles (6.1 billion km), or farther from the star than Pluto's average distance from the sun. [9 Most Intriguing Earth-Like Planets]

Back in July 2018, the European Southern Observatory's Very Large Telescope (VLT) spotted a huge planet, between four and 17 times the mass of Jupiter, orbiting PDS 70 close to the inner edge of that gap. Astronomers named this planet PDS 70b. Now, in a new paper published Monday (June 3) in the journal Nature Astronomy, scientists revealed that there's a second planet in that gap.

The newfound planet, PDS 70c, has a mass between one and 10 times that of Jupiter. This world orbits closer to the outer edge of the gap, at a distance similar to Neptune's 3.3 billion miles (5.3 billion km). PDS 70c orbits its star once for every two orbits of its larger, inner twin.

"We were very surprised when we found the second planet," Sebastiaan Haffert, an astronomer at Leiden Observatory in the Netherlands and lead author on the paper, said in a statement.

None of this quite rises to the level of proof that protoplanetary disk gaps like this abound with young planets, the researchers wrote. But the findings are suggestive.

"With facilities like ALMA, Hubble or large ground-based optical telescopes ... we see disks with rings and gaps all over. The open question has been, are there planets there? In this case, the answer is yes," Julien Girard, an astronomer at the Space Telescope Science Institute in Baltimore and an author of the paper, said in the statement.

Spotting exoplanets in gaps like this is challenging, because to be visible, the disk must present its flat face to Earth, not its edge. But astronomers usually discover exoplanets indirectly by observing them pass in front of their stars. A planet orbiting in a disk that faces Earth will never pass between Earth and the star, so such a world has to be directly imaged. And while thousands of exoplanets have been discovered through the indirect method, direct detection is rare.

This is only the second multiplanet system ever directly imaged, the researchers said. And the two planets are part of just a bit more than a dozen exoplanets ever directly spotted.

Down the road, the researchers said, they hope to train telescopes other than the VLT on the planets to learn more about them and deepen scientists' understanding of how young planets shape and are shaped by protoplanetary disks.