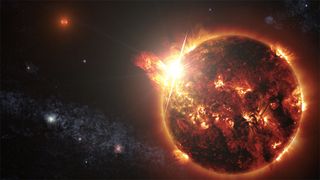 This illustration shows a coronal mass ejection (CME) blasting off the surface of a star.
(Image: © NASA/GSFC/S. Wiessinger)

Scientists have, for the first time, spotted plasma blasting off the surface of a giant star.

The observation, published May 27 in the journal Nature Astronomy, represents the first direct look at a coronal mass ejection (CME) from a star other than our sun. And the observation revealed a plasma blast of astonishing scale: roughly 2.6 quintillion lbs. (1.8 quintillion kilograms) of superhot matter — peaking at 18 million to 45 million degrees Fahrenheit (10 million to 25 million degrees Celsius). Note: A quintillion is equal to a billion billions.

The CME was enormous in human terms, but it was difficult to spot. From Earth it looked like a comparatively slow, small and cool mass that followed a bright stellar prominence — or loop of even hotter, faster-moving, heavier plasma that doesn't fully escape the star — off the star's surface.

That CME mass is "about 10,000 times greater than the most massive CMEs launched into interplanetary space by the sun," the researchers behind the paper said in a statement. [15 Amazing Images of Stars]

And that scale is a big deal.

We know that our sun tends to do two things at the same time: emit a lot of radiation (that's called a flare) and spit out CMEs (hot bursting bubbles of plasma). And astronomers know that a stronger flare generally is accompanied by a stronger CME. But until now, there had been no direct evidence for this relationship on other, larger stars.

But HR 9024, a giant star about 450 light-years away from Earth, produced a CME that closely matched an accompanying flare and that scaled with the size of the star. This is evidence, the researchers said, that the rules governing CMEs in our solar system hold elsewhere in the universe for other types of stars.

To pull off the measurement, the researchers relied on the High-Energy Transmission Grating Spectrometer, an instrument aboard NASA's orbiting Chandra X-Ray Observatory. It's the only instrument humans have made that's capable of observing stellar events on this relatively small scale within a solar system.

In addition to providing evidence for how CMEs behave on other stars, the observation may help explain how stars' masses and rates of spin fall over time, the researchers said. When a CME's mass escapes, it takes some of the star's momentum with it. This CME was big enough that, assuming CMEs like this are common, it could explain how stars shrink and slow down.