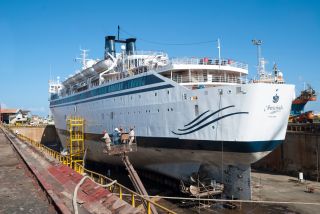 St. Lucia quarantined a U.S. cruise ships after a confirmed case of measles onboard. The ship was reportedly the Church of Scientology's "Freewinds" ship, pictured here in Curacao in 2016.
(Image: © Shutterstock)

Officials from the Carribean island of St. Lucia quarantined a U.S. cruise ship following a confirmed case of measles onboard.

"We thought it prudent that we quarantine the ship" considering the highly infectious nature of measles, Dr. Merlene Fredericks-James, the country's chief medical officer, said in a video statement. As such, the nearly 300 passengers and crew aboard were not allowed to disembark on the island.

Though Fredericks-James didn't mention the name of the ship, the St. Lucia coast guard told NBC News that the vessel had the same name as the ship "Freewinds," which is owned by the Church of Scientology. The coast guard confirmed that it was indeed the same ship after looking at a picture of it on the church's website. [27 Devastating Infectious Diseases]

Measles is highly contagious, in part because the virus particles can remain in the air for up to 2 hours, Live Science previously reported. But the disease is also highly preventable thanks to vaccines.

The U.S. is in the midst of multiple measles outbreaks, and the Centers for Disease Control and Prevention has confirmed more than 700 cases of the disease so far this year, the highest number of cases since 1994. (The disease was considered to be eliminated from the U.S. in 2000.) The dramatic increase is due, in part, to low vaccination rates in certain parts of the country, which have left people, especially young children, vulnerable to the infection.

Fredericks-James ended her statement with a warning to the people of St. Lucia to make sure they and their children are up to date with their vaccinations, especially since many travel to and from the United States, where "there is a situation going on."

The ship is scheduled to leave the island near midnight on Thursday, according to NBC News.