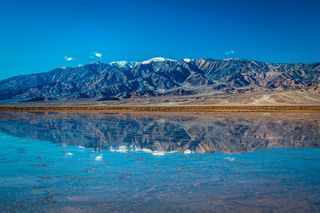 A 10-mile-long (16 kilometers) lake just popped up in the middle of the hottest place on Earth.

Last week, a storm blew through Death Valley National Park in California, drenching the desert and the rest of Southern California. Now, amid the desert's echoing landscape, there sits a very misplaced lake.

The lake formed near Salt Creek, an area near the eastern edge of the park, according to SFGate. It's unclear exactly how big the lake is, but representatives from the park estimated it to be around 10 miles long. [Hell on Earth: Tour Death Valley]

Death Valley is not only the hottest place in the world, with temperatures that can reach 134 degrees Fahrenheit (57 degrees Celsius), but also the driest place in North America.

On average, Death Valley receives less than 2 inches (5 centimeters) of rain a year, according to the National Park Service. Typically, about 0.3 inches (0.76 cm) of that rainfall comes in March, but within a single day last week, 0.84 inches (2.13 cm) of rain fell in the park, according to SFGate.

This isn't much when compared with the rainfall in the rest of the country, or even the rain that this storm brought to other parts of Southern California. But unlike other areas, the desert has dry, compact soil that doesn't absorb water well, a National Weather Service meteorologist Todd Lericos told SFGate.

In the aftermath of the storm, California-based photographer Elliot McGucken captured just how bad California's famous desert is at absorbing water in his gorgeous images of the pop-up lake.

Editor's Note: This story was updated to correct the amount of rainfall that fell in Death Valley. It was 2.13 cm, not 213 cm.