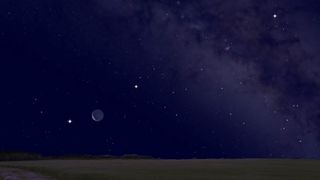 Skywatchers should look out for a planet party in the morning sky this Friday and Saturday (March 2 to 3).
(Image: © Starry Night software)

This weekend, a brilliant display of planetary objects will dazzle you — if you can wake up before the sun rises. Venus will be shining spectacularly beside Saturn, Jupiter and the crescent moon. This brilliant spectacle will begin on Friday (March 1) when the crescent moon will be in conjunction with Saturn and continue into Saturday (March 2), when the moon will be in conjunction with Venus.

Skywatchers in the Northern Hemisphere will have a great view of this planetary party in the sky if they're awake before dawn. If you're in this region and you look up at the sky about an hour before sunrise on Friday, you will be able to see the moon make a close approach to Saturn, with Venus and Jupiter shining brightly nearby. For those with a keen eye for constellations, you will find the moon and Saturn nestled in the constellation Sagittarius, with Venus hovering to their left at the boundary between Sagittarius and Capricornus.

During the crescent moon's conjunction with Saturn, skywatchers will find Saturn cuddling up close to the moon, though Venus will be the second-brightest object in the sky (after the moon). During the moon's conjunction with Venus the following morning, the pair will be close together and close to the horizon, with Venus continuing to glow brilliantly and the waning moon appearing slightly thinner than before.

Related: When, Where and How to See the Planets in the 2019 Night Sky

During this planetary dance on Friday, the 25-day-old moon will be in conjunction with Saturn at 1:28 p.m. EST (1828 GMT), passing by at 0.3 degrees to the north of the ringed planet, according to the skywatching website In-The-Sky.org. On Saturday, the moon will pass 1.2 degrees to the south of Venus, making its closest approach at 4:29 p.m. EST (2129 GMT).

Although skywatchers in the U.S. will not be able to see the planets at the exact moment of the conjunctions, the view will be just as nice in the morning before the daylight washes them out. However, Venus and Saturn will be fairly close to the horizon at sunrise and may be obstructed by tall buildings, trees or mountains. To figure out exactly what time each of the planets will rise from your location, check out timeanddate.com's astronomy calculator.

On Friday, the moon will be shining at a magnitude of -10.8, and Saturn at magnitude 0.4 (on the scale of stellar magnitude, larger values correspond to brighter objects). On Saturday, the moon will be slightly dimmer at magnitude -10.3, and Venus at mag -4.1, making Venus and the moon the two brightest objects in the sky. In fact, Venus will be so bright that you might even be able to see Venus hanging out near the moon after the sun is up. Jupiter will be the third-brightest object in the sky before dawn that morning. Saturn, the dimmest of these visible planets, will be visibly shining between Jupiter and Venus until the sun washes it out.

For telescope fiends, it might be tough to see all of these objects through the lens of a telescope, since they will be too far apart. But with the naked eye or even through a pair of binoculars, skywatchers can get an incredible eyeful this upcoming weekend.

Editor's note: If you captured an amazing night sky photo and would like to share it with Space.com for a story or gallery, send images and comments to managing editor Tariq Malik at spacephotos@space.com.