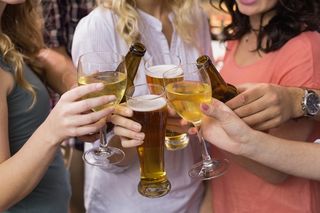 The adage, "beer before wine and you'll feel fine, wine before beer and you'll feel queer" doesn't hold up to scientific scrutiny. A new study finds that the order in which you consume alcoholic drinks won't actually help you avoid a hangover.

Rather, drinking too much alcohol of any kind — and in any order — will likely give you a hangover, the study researchers conclude.

"We didn't find any truth in the idea that drinking beer before wine gives you a milder hangover than the other way around," lead study author Jöran Köchling, of Witten/Herdecke University in Germany, said in a statement. "The truth is that drinking too much of any alcoholic drink is likely to result in a hangover." [11 Interesting Facts About Hangovers]

The study is published yesterday (Feb. 7) in the American Journal of Clinical Nutrition.

Putting proverbs to the test

There is no medically proven way to prevent or treat a hangover — the symptoms of headache, nausea and fatigue that come with drinking too much alcohol. Instead, people sometimes rely on such unproven folk sayings as "wine before beer"; or "grape or grain but never the twain"; or "beer before liquor, never been sicker." Similar folk wisdom on the ordering of wine and beer exist in other languages, including German and French.

The new study put these proverbs to the test. The researchers recruited 90 healthy volunteers ages 19 to 40 who agreed to down large amounts of alcohol, for science.

The participants were divided into three groups. The first group consumed about two and a half pints of beer (with an alcohol content of 5 percent each) followed by four large glasses of wine (with an alcohol content of 11 percent each). The second group consumed the same amount of alcohol, but in reverse order (wine followed by beer). The third group drank only beer or only wine. During the drinking task, the participants were asked to rate their perceived level of drunkness.

Afterwards, they spent the night at the study site under medical supervision. The next day, participants were asked about their hangover symptoms; and they were given a score based on the number and severity of those symptoms, such as thirst, fatigue, headache, dizziness, nausea, stomach ache, increased heart rate and loss of appetite.

A week later, the participants came back to the study site to perform the drinking task again, but participants in groups one and two were switched to the opposite drinking order. (Those who consumed beer first on the initial visit consumed wine first on the second visit, and vice versa.) Participants in the third group who drank only beer on the first visit drank only wine on the second visit, and vice versa. This way, the researchers could compare the reactions of each individual to the same person's earlier experience. (In other words, each person served as their own "control."

The researchers found that participants in all three groups had similar hangover scores.

"Unfortunately, we found that there was no way to avoid the inevitable hangover just by favouring one order over another," senior study author Dr. Kai Hensel, a senior clinical fellow at the University of Cambridge in the United Kingdom, said in the statement.

"The only reliable way of predicting how miserable you'll feel the next day is by how drunk you feel and whether you are sick. We should all pay attention to these red flags when drinking," Köchling said.

The researchers note that the study used only lager beer and white wine, so it's unclear if the results apply to other types of alcohol.