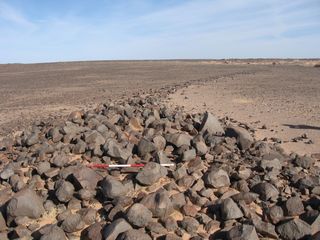 The structures come in various shapes and sizes, including one that curves off into the horizon (shown here).
(Image: © Copyright Nick Brooks and Joanne Clarke)

Hundreds of stone structures dating back thousands of years have been discovered in the Western Sahara, a territory in Africa little explored by archaeologists.

The structures seem to come in all sizes and shapes, and archaeologists aren't sure what many of then were used for or when they were created, archaeologists report in the book "The Archaeology of Western Sahara: A Synthesis of Fieldwork, 2002 to 2009" (Oxbow Books, 2018).

Between 2002 and 2009, archaeologists worked in the field surveying the landscape and doing a small amount of excavation in the part of Western Sahara that is controlled by the Sahrawi Arab Democratic Republic. They also investigated satellite images on Google Earth, they wrote in the book.

"Due to its history of conflict, detailed archaeological and palaeoenvironmental research in Western Sahara has been extremely limited," wrote Joanne Clarke, a senior lecturer at the University of East Anglia, and Nick Brooks, an independent researcher.

"The archaeological map of Western Sahara remains literally and figuratively almost blank as far as the wider international archaeological research community is concerned, particularly away from the Atlantic coast," wrote Clarke and Brooks, noting that people living in the area know of the stone structures, and some work has been done by Spanish researchers on rock art in Western Sahara.

The stone structures are designed in a wide variety of ways. Some are shaped like crescents, others form circles, some are in straight lines, some in rectangular shapes that look like a platform; some structures consist of rocks that have been piled up into a heap. And some of the structures use a combination of these designs. For instance, one structure has a mix of straight lines, stone circles, a platform and rock piles that altogether form a complex about 2,066 feet (630 meters) long, the archaeologists noted in the book.

Though the archaeologists are unsure of the purpose of many of the structures, they said some of them may mark the location of graves. Little excavation has been done on the structures, and archaeologists have found few artifacts that can be dated using a radiocarbon method. Among the few excavated sites are two "tumuli" (heaps of rock) that contain human burials dating back around 1,500 years.

Research suggests that Western Sahara was once a wetter place that could sustain more animal life than it does today. Archaeologists documented rock art showing images of cattle, giraffe, oryx and Barbary sheep while environmental researchers found evidence for lakes and other water sources that dried up thousands of years ago.

At present, security problems in the region mean that fieldwork has stopped, Clarke and Brooks told Live Science. The terrorist group al-Qaeda in the Islamic Maghreb operates in the desert regions near Western Sahara, and in 2013 they kidnapped two Spanish aid workers at a refugee camp in Tindouf, Algeria, just across the border from Western Sahara.

While the Sahrawi people and Sahrawi Arab Democratic Republic strongly oppose the terrorist group, it's extremely difficult for authorities to effectively patrol the vast desert areas where the stone structures are located, Clarke and Brooks said. This means archaeologists can't work there safely right now. This problem is not unique to Western Sahara, as the security risks posed by terrorist and extremist groups in the region mean that archaeologists can't work in much of North Africa right now, they said.