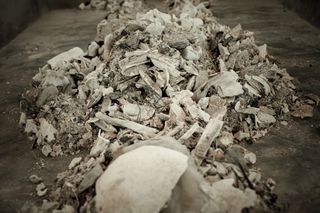 Burned bones are a vexing problem for archaeologists. Cremation burns away information: sex, age and other identifying features are wiped clean by fire.

But there may be some hope left for getting information from burned bones. In a new study of Iron Age and Bronze Age skeletons, researchers have found that it's likely possible to determine the sex of an individual, even from small bone fragments.

"In Europe, especially in the second and first millennium B.C., we just have almost exclusively cremations," said study author Claudio Cavazzuti, a bioarchaeologist at the Museo delle Civiltà in Rome. "It's very important to reconstruct the ritual customs, but also the demographic structure of these societies." [Bones With Names: Long-Dead Bodies Archaeologists Have Identified]

Unfortunately, those societies did not make it easy on modern archaeologists. Cremation does a number on bones. It shrinks them and warps them, Cavazzuti told Live Science. And while ancient cultures didn't pulverize bones to powder like most crematories today, the bones would splinter and fragment as the funeral pyre collapsed. Occasionally, fragments of up to 10 inches (25 centimeters) long will survive cremation, said Elżbieta Jaskulska, an archaeologist at the University of Warsaw who specializes in cremated remains. But finding a specimen with fragments that large is like winning the lottery, Jaskulska, who was not involved in the current study, told Live Science. More often, archaeologists feel lucky to get fragments that are 1 to 2 inches (2.5 to 5 cm) long. [After Death: 8 Burial Alternatives That Are Going Mainstream]

Making matters worse, the delicate, spongy bones in the pelvis and at the ends of joints are most susceptible to flame, Jaskulska said, so the most information-rich parts of the skeleton are lost most easily.

Some researchers have tried to figure out sex-specific measurements in cremated bones by looking at modern cremations, where the sex of the deceased is known. The problem with that, Cavazzuti said, is that modern people are bigger-boned than ancient people, so the measurements may not translate. These methods tend to classify ancient men as women.

So Cavazzuti and his team took a controversial approach. They gathered 124 burials from between the 12th and sixth centuries B.C. from five necropolises in Italy. All the specimens had been held in the Museo delle Civiltà. When the bones were originally found, they had been buried with objects that likely hint at the sex of the individuals: weapons for men, weaving tools for women. This is a fraught assumption, the researchers admitted today (Jan. 30) in the journal PLOS ONE. There's no guarantee that the gender indicated by the grave goods matches the individual's biological sex. Indeed, Jaskulska said, many cultures around the world recognize more genders than male and female, so assumptions about binary gender are tricky.

Cavazzuti and his colleagues argued, however, that most bodies with masculine objects were likely biologically male, and most with feminine objects were likely biologically female. Proceeding from that assumption, they made 24 measurements of various bones, such as the width of the part of the jaw that connects to the skull and the diameter of the head of the thigh bone.

They found that 21 of the 24 measurements predicted a sex matching the individual's grave goods. Eight measurements, including the width of the kneecap, the diameter of the head of the radius in the forearm and the length of the lunate — a tiny bone in the hand — predicted whether an individual was male or female (as gauged by grave goods) with at least 80 percent accuracy.

The method is intriguing, Jaskulska said, but it may not be universally useful, because the bones measured by Cavazzuti's team are not found in all cremations. In fact, she said, they're quite rarely preserved.

"I have a very nicely preserved burial I'm working with," Jaskulska said, noting that many fragments in her current specimen range up to 2 inches (5 cm) in length. "I said to myself, 'Let's see how many of those measurements I can take from that burial,' … there is not even one that I can take down."

Another promising method, Jaskulska said, might be to study cremated bone fragments on a microscopic level. Sex differences in the microscopic structure of bone might survive fire, she said.

Cavazzuti and his colleagues plan to test their method on other remains. The study of cremated bones is becoming more sophisticated, Cavazzuti said. Scientists are now able to extract isotopes of the element strontium from some burned bones that can indicate where a person grew up, which can in turn reveal patterns of human mobility. Those patterns, he said, might be very gender-dependent.

"It's maybe the warriors, or the artisans, or the wives who were moving around," he said. "So it's important to have this basic information."