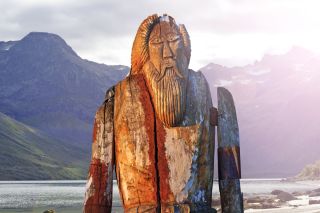 What did the Vikings really believe about the Norse gods like Odin?
(Image: © Shutterstock)

Today, the name "Thor" likely conjures up an image of a well-muscled Chris Hemsworth playing the Norse-inspired superhero on the big screen. For the actual Vikings, the god of thunder may have similarly been admired for his great feats — but certainly not for his moral fortitude.

New research suggests that Vikings didn't look to their pantheon of gods for moral enlightenment, nor did they expect the gods to punish wrongdoers.

Despite their lack of all-knowing, moralizing gods, the Vikings developed a complex society. That suggests that even belief in smaller deities can spur human cooperation, researchers reported in December 2018 in the journal Religion, Brain & Behavior.

"From the Viking perspective, there seems to be a number of supernatural beings that facilitate cooperation," said study author Ben Raffield, an archaeologist at Uppsala University in Sweden. [Fierce Fighters: 7 Secrets of Viking Seamen]

Thor, Odin, Freyja and the other Norse gods are well-known names even today, but figuring out what the Vikings actually believed about them is a tricky business. Prior to the arrival of Christian missionaries and travelers starting around A.D. 800, the people of Scandinavia didn't write much of anything down. The sagas, poems and ballads that record the tales of the Norse pantheon were all written down relatively late, between the 12th and 14th centuries, Raffield told Live Science. When the tales were written down, Christians or people who'd come in contact with Christians were the ones doing the writing — meaning it's hard to say whether Christian values had colored the tales.

Still, the sagas and poems do reveal some information about pre-Christian Scandinavian belief, Raffield said, particularly when combined with archaeological evidence. He and his colleagues analyzed common Viking artifacts and multiple texts, including the Poetic Edda, the Prose Edda, several sagas and traveler accounts. [Image Gallery: Viking Voyage Discovered]

The study is part of an ongoing anthropological debate over whether supernatural beliefs form the scaffolding of complex societies. Some evidence from history and psychology studies suggests that a god or gods can keep people in line with the threat of punishment, thus increasing cooperation, even among strangers. But if this is true, it's not entirely clear whether a "big" god like the all-knowing god of the Jewish, Muslim and Christian faiths is necessary, or if any sort of monitoring by otherworldly beings will do the trick.

The Vikings were an intriguing case study for the question of whether a god or gods can help facilitate the development of a complex society, because they went through major changes between around A.D. 750 and A.D. 1050. At the beginning of this period, Scandinavia was peopled by small tribes. By the end, it was a hierarchical society of kingdoms, politics and laws that was capable of launching seafaring expeditions all the way to North America. Raffield and his co-authors wanted to know if moralizing high gods, or "big" gods like the God of the Bible, were necessary for this transformation.

Their findings suggest that they were not. The sagas, poems and artifacts of the old Norse people do indicate that Vikings believed that supernatural beings were watching them. They swore oaths by the gods and sometimes wore oath rings dedicated to the god Ullr. Some war helmets bore a gold-and-garnet eye representing the eye of the god Odin. Scandinavian contracts mentioned gods, and characters in sagas who failed to make sacrifices to the gods often died in awkward ways. (One popular fate was to get impaled on one's own sword.)

But the Viking gods did not seem to be "big" gods, Raffield said. They weren't supremely powerful — in fact, Norse mythology holds that they weren't even immortal, but were fated to die in a cataclysm called Ragnarök — and they weren't omnipotent. They weren't even the first beings: According to the Prose Edda, Odin and his brothers were born of the first man (licked out of a salty ice block by a cow) and the daughter of a frost giant. And, morally speaking, they were kind of a mess.

"They might, or might not, punish those who violated social norms, and in some cases they actively engineer situations that were designed to harm humans, for no other reason than because they could, because that is what made them powerful," Raffield said. "So, it seems that they were not especially concerned about upholding moral standards, or punishing humans who failed to do so."

These findings indicate that big, omnipotent gods weren't necessary for a society to become more complex, Raffield said. They also point to a system of belief quite unlike most of the major world religions today. The Vikings also believed in a number of nondeity supernatural forces, Raffield said. These included elves, dwarfs, ogres, trolls and giants, any of whom could meddle in human affairs. [Supernatural Powers? Tales of 10 Historical Predictions]

"You would have been wise not to anger any of them if you wished to live to old age, but, again, there is no evidence to suggest that these beings would hold you to any form of behavioral code, nor follow one themselves," Raffield said.

In fact, the Vikings may not have viewed the gods as the most important factor in their success or failure at all, he said. Perhaps more important was the concept of fate. One group of spirits, the disir, was said to determine a person's fate by favoring or neglecting him; some cast lots or wove cloth to determine the events of a person's life.

"So perhaps the gods were less influential than we today would ordinarily perceive them to be," Raffield said.

By the same definition of morality, Greek and Roman gods were similarly capricious and amoral, Raffield said, but both of those societies were extremely complex. Perhaps any sort of god could prompt widespread cooperation, he said — or perhaps supernatural forces aren't so crucial to complexity after all.

"I'd certainly like to think that humans have the capacity to live and work together without relying on the intervention of supernatural beings," Raffield said, "but I am in no way qualified to answer that one."