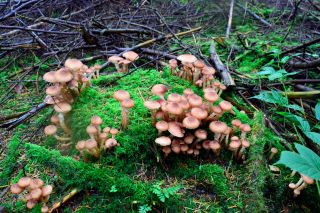 Much of the fungus (Armillaria gallica) is underground, but in the fall it sprouts honey mushrooms.
(Image: © Shutterstock)

A humongous fungus lurking underground in Michigan is exceptionally old, tremendously heavy and has a curiously low mutation rate, a new study finds.

Here are the fungus' impressive stats: It's at least 2,500 years old (although it's likely much older), weighs nearly 882,000 lbs. (400,000 kilograms) and spans about 75 hectares (0.75 square kilometers, or 140 American football fields). As for its mutation rate, or the rate at which random genetic tweaks occur, it's fleetingly low, said study co-principal investigator Johann Bruhn, a professor emeritus of plant sciences at the University of Missouri.

"We think that this slow mutation rate is perhaps key to the genetic stability of the humongous fungus and may even be a key reason for its great longevity," Bruhn told Live Science. [Microscopic Worlds Gallery: See Images of Fascinating Fungi]

Bruhn first came across the absolute unit (Armillaria gallica) in the late 1980s, when he was doing an unrelated experiment in the forest of Michigan's Upper Peninsula. He roped in two more fungal experts, James Anderson, now at the University of Toronto, and Myron Smith, now at Carleton University in Ottawa, Canada, who are also co-principal investigators on the new study. The giant fungus stunned the researchers, who initially vastly underestimated its age and size. (Back then, they thought the fungus was about 1,500 years old, 220,000 lbs. (100,000 kg) and about 37 hectares (0.3 square km), according to their 1992 study published in the journal Nature.)

At the time, the public went bonkers over the giant fungus, which is also known as the honey mushroom, Bruhn recalled. Late night comedian David Letterman made a "Top 10" list about it; Johnny Carson cracked jokes; and a New York City restaurant even called to see if it could purchase the fungus to serve on its dinner menu.

Bruhn declined the restaurant's request, but noted that well-cooked honey mushrooms are edible, although eating too many can give you a stomachache. "They need to be cooked thoroughly, and they should not be eaten in excess," he said. "But I've enjoyed them on homemade pizzas."

Now, nearly 30 years later, the scientists' latest experiments reveal the true immensity of A. gallica, Bruhn said. Despite its size, the fungus is largely underground, hidden from view. The fungus uses some of the energy it obtains from decaying a woody foodbase to grow branching tendrils known as rhizomorphs, which travel through the forest floor in search of their next meal. Rhizomorphs attach themselves to tree roots. Once the tree becomes vulnerable, for instance because of drought or pests or fire, the fungus attacks, sapping the tree's nutrients and decaying its wood into a white rot. Every fall, the fungus sprouts mushrooms, which allow the fungus to reproduce.

From 2015 to 2017, the scientists revisited the humongous fungus and took 245 samples so that they could run a whole-genome sequences of its genetic material. They estimated its age of 2,500 years by analyzing the fungus' growth rate. However, this particular A. gallica could be even older because there are other Armillaria species in the area, which may have hindered A. gallica's growth, Bruhn said.

It's a mystery why A. gallica has such a low mutation rate, but it could be a biological mechanism, the researchers said. Or, perhaps the fact that it's largely underground, away from the mutation-causing ultraviolet rays of the sun, can explain its low rate of mutations, Bruhn said.

While the study shows that Michigan's A. gallica is indeed a giant, it's not the largest fungus out there. "Indeed, at least two other individuals of a sibling Armillaria species (A. solidipes) have been reported to occupy larger areas" in Washington and Oregon, the researchers wrote in the study.

The study was published online today (Dec. 19) in the journal Proceedings of the Royal Society B.