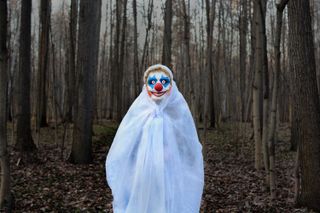 Laughter can be heartwarming, contagious, lovely … and at times, very, very unsettling. There's something about a cackling clown or a chuckling robot that can convince us of imminent doom

So, why does laughter sometimes frighten us?

"A lot of fear stems from dissonance or violation of our expectation," said Margee Kerr, a sociologist at the University of Pittsburgh who specializes in the study of fear and who wrote the book "Scream: Chilling Adventures in the Science of Fear" (Public Affairs, 2015). In other words, we get scared when something goes against our expectations. That's why we can find it terrifying to see children — who usually act cute and happy — behaving in weird ways as if "possessed," as happens in movies like "The Exorcist" and "Children of the Corn," Kerr said.

Laughter in an unusual setting prompts a similar response. "Whenever we take something that's supposed to be linked to positive emotions, feelings of innocence or joy, and then flip it in some way, by either making it a little bit sinister or out of context, it sends a red flag" or an error message, Kerr told Live Science. "People shouldn't be happy about doing bad things, so when they are … that's a cue that something's not right and we can't trust them." [Why Are People Afraid of Clowns?]

So, no, the Joker shouldn't laugh (a sign of a positive emotion) about the destruction of others (a negative situation). And no, Cruella de Vil shouldn't laugh after saying, "Well, if we make this coat, it would be as if I were wearing your dog." (This was scary, OK?)

But at the physiological level, "laughter and fear are very similar," Kerr said. They are both "high-arousal states," or times when we are feeling intense emotions, she said. That's why it's not uncommon for a startled person to first scream and then laugh. All of that energy is there, and once people realize they aren't in danger, they can quickly turn that scream into a laugh, Kerr said.

Culture also plays a role in how we perceive laughter.

In Western society, because we learn to associate laughter with positive feelings, "when it's in the context of evilness or hurting people, then it doesn’t make sense," Kerr said. In some cultures that aren't necessarily globally connected, the sound of any kind of laughter can prompt a similar uneasiness. "If you go into cultures that haven't had a lot of exposure to mainstream media, laughter can be very strange just in general," she added.

Though we typically associate laughter with positive thoughts, sometimes the very meaning of laughter can be unclear. Indeed, there's a  big difference between "laugh[ing] at someone" and "laugh[ing] with someone," said Dr. Israel Liberzon, the psychiatry department head at Texas A&M College of Medicine.

And if that laughing person isn't a person at all — if it's, say, a robot or a doll, something that's supposed to be free from the tangle of human emotions— there's an added layer of creepiness, Kerr said.

For example, a few months ago, Amazon's Alexa virtual assistant randomly broke out laughing, unprompted, in people's homes, according to CNBC. And people were terrified. Amazon explained that the reason for the assistant's hilarity was that Alexa sometimes mistakenly thought someone was saying, "Alexa, laugh."

"When we hear our GPS or Alexa or Siri respond affectionately, they're always doing so in response to something we've done," Kerr said. "They have no independently motivated expressions of emotions." But when Alexa randomly laughs on its own, "it introduces this problem of 'Why is Alexa laughing?' [when] it's supposed to be something that is detached from sentiment."

It made people think that Alexa had reached a level of consciousness that only humans have been known to possess, Kerr said. That would be kind of funny, right?