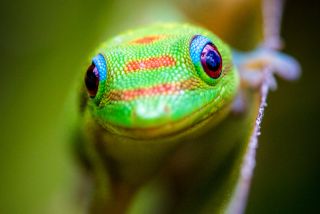 A gold-dusted day gecko in Hawaii recently made "a bazillion" phone calls when his toes inadvertently pinged the keys on someone's cell phone.
(Image: © Shutterstock)

If you have never been prank-called by a lizard, you probably don't live in Hawaii.

Dr. Claire Simeone, the director of the Kei Kai Ola hospital for Hawaiian monk seals, definitely does. Earlier this week, Simeone had just left work for lunch when her phone started ringing. A lot.

"I thought maybe someone had a seal-related question," Simeone wrote on Twitter earlier today (Oct. 5). "I picked up. Silence."

Seconds later, Simeone's phone rang again — and then again, and again. Each time she answered, there was nothing but eerie silence. After receiving nine identical calls in 15 minutes, Simeone "started to panic," she said. The calls were apparently coming from inside the hospital, so she rushed back to work, worried that a "seal emergency" was transpiring in her absence.

There was no emergency (thankfully), seal or otherwise. In fact, Simeone's co-workers said nobody had tried to call her at all.

"Meanwhile," Simeone wrote, "several other people call the hospital, asking WHY WE ARE CALLING THEM INCESSANTLY?"

When Simeone called the hospital's phone company to get to the bottom of the phantom calls, a technician confirmed that "a bazillion calls" had indeed been dialed from one particular line in the hospital. Simeone hunted from room to room until she finally tracked the mystery dialer to the center's laboratory. There, she caught her perpetrator red-handed … or rather, green-footed.

"THERE IS A GECKO SITTING ON THE TOUCH SCREEN OF THE PHONE, MAKING CALLS WITH HIS TINY GECKO FEET!!!" Simeone tweeted. "This gecko has called me 15 times and everyone in our recent call list."

Mystery solved. Simeone said she "immediately hired the gecko" and drafted an apology to everyone on staff who may have gotten a call from the tiny, green menace.