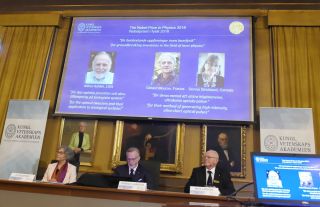 Members of the Nobel Committee for Physics sit in front of a screen displaying portraits of this year's Laureates: Arthur Ashkin, Gerard Mourou and Donna Strickland.
(Image: © Hanna Franzen/AFP/Getty Images)

Three scientists were awarded the Nobel Prize in physics this morning for their groundbreaking inventions in the field of laser physics.

Donna Strickland and Gérard Mourou were awarded one half of the award, with the other half going to Arthur Ashkin. Strickland is only the third women to be awarded a Nobel in physics ever. (The other two were Marie Curie in 1903 and Maria Goeppert-Mayer in 1963.)

"We need to celebrate women physicists because they’re out there… I’m honored to be one of those women," Strickland said, according to the Nobel Prize Foundation.

When she received the call this morning telling her about the award, as many Laureates in the past have said, she was in disbelief. "First of all, you have to think it's crazy. So that was my first thought and you do always wonder if it's real," Strickland said during a press briefing this morning at the Royal Swedish Academy of Sciences in Sweden.

Ashkin, of Bell Laboratories in Holmdel, New Jersey, is being honored for his invention of optical tweezers; these laser beam fingers can grab the teensy living cells, including particles, atoms and viruses. "This new tool allowed Ashkin to realize an old dream of science-fiction — using the radiation pressure of light to move physical objects," the Royal Swedish Academy of Sciences said in a statement. In 1987, he used the tweezers to grasp living bacteria without harming them, according to the academy statement.

Achievements by Strickland, of the University of Waterloo in Canada, and Morou, of the École Polytechnique, Palaiseau, France, led to the creation of the world's shortest and most intense laser pulses. (Morou is also a professor at the University of Michigan, Ann Arbor.)

The duo invented what is called chirped pulse amplification, a process in which laser pulses are stretched in time, amplified and then compressed. When a pulse gets squished in time, becoming shorter, the same amount of light is packed into a tiny space and so the pulse's intensity skyrockets.

When asked this morning about the groundbreaking discovery, Strickland said, "It's thinking outside the box to stretch first and then amplify. Most people were amplifying and trying just to compress whatever they had amplified."

This technique is used in millions of laser eye surgeries every year, according to the academy statement.

Askkin will receive half of the 9 million krona ($1.01 million) Nobel Prize award, and Mourou and Strickland will share the other half.