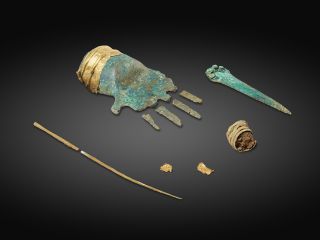 This Bronze Age hand has a gold cuff. Next to it, sit a dagger, a bronze pin and a spiraled hair ornament. The two gold flakes likely came from the metal hand.
(Image: © Copyright Philippe Joner/Archaeological Service of the Canton of Bern)

The slightly smaller-than-life hand, crafted during the Bronze Age, is the oldest metal sculpture of a human body part in Europe, the archaeologists said.

An ancient artisan placed a hollow socket at the bottom of the hand, a clue that the body part was once mounted on another object, such as a statue or a scepter, the archaeologists said. Perhaps it was even used as a prosthetic or during rituals, Andrea Schaer, head of the Ancient History and Roman Archeology Department at the Archaeological Service of the Canton of Bern, told National Geographic.

Treasure hunters armed with metal detectors made the handy discovery near Lake Biel in the Swiss canton (province) of Bern in October of 2017. The next day, the discoverers gave the hand, along with a bronze dagger and rib bone found with it, to the Archaeological Service of the Canton of Bern. [Body Beautiful: The 5 Strangest Prosthetic Limbs]

"We had never seen anything like it," Schaer told National Geographic. "We weren't sure if it was authentic or not — or even what it was."

Radiocarbon dating on the glue used to attach the gold foil to the bronze hand revealed that ancient people had made the hand between 1500 B.C. and 1400 B.C. These dates jibed with the age of the bronze dagger, the archaeologists noted in a statement.

Intrigued, the archaeologists went to the site this past spring to see if any more artifacts from that period lay buried there. Their due diligence paid off; Schaer and her colleagues found a damaged grave near the small village of Prêles, not too far from Lake Biel. The grave held the bones of an adult man, as well as a bronze fibula (leg bone), a spiral-shaped bronze hair ornament and tiny pieces of gold plate, which match those on the bronze hand.

In addition, the archaeologists found a broken-off bronze finger at the site, which gave more evidence that the hand had been buried there.

The archaeologists found another surprise beneath the grave: a stone structure constructed by ancient people. It appears that the man, the likely owner of the bronze hand, was deliberately placed over this structure, the archaeologists noted.

"He must have been a high-ranking character," the archaeologists said in the statement. The hand's "gold ornament suggests that it is an emblem of power, a distinctive sign of the social elite, even of a deity."

The scientists said they plan to study the chemical makeup of the hand to figure out if it was made in the region or in a distant land. The finding is truly one-of-a-kind, as there aren't any other known metal sculptures like this in Central Europe dating to the Bronze Age, the archaeologists added.

The hand will be on display through Oct. 14 at the New Biel Museum (Neues Museum Biel). The hand's purpose, however, may remain a mystery.

"Finds like this remind us how many gaps there still are in our knowledge about the past," Stefan Hochuli, the head of the Department of Monument Preservation and Archaeology in the nearby Swiss canton of Zug, told National Geographic. "It gives us a glimpse into the spiritual world of this society — and it's a lot more complex than we often think."