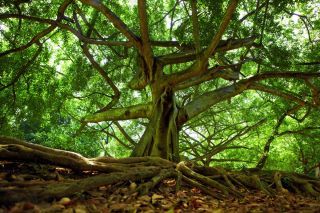 A story of apparent tragedy and luck is making its way around the Internet, describing how a fig seed in a murdered man's stomach grew into a tree, which later helped authorities find his corpse almost 40 years later in a Cypriot cave.

But, like many fantastical tales, key elements of this story appear to be false — at least according to several news outlets. But it still raises the question: Can a seed in a dead person's stomach really grow into a fruit-bearing tree?

The answer is yes, according to Jay Noller, a professor of soil science at Oregon State University, who has spent time in Cyprus but is not involved with the fig tree incident. [Nature's Giants: Photos of the Tallest Trees on Earth]

Fruit-bearing plants often rely on fruit-munching animals — from birds and bats to bears and monkeys — to eat their fruits. Once these animals poop out the indigestible seeds, the plants have a chance to grow roots wherever the animal lays down a turd.

"Seeds can emerge from animals, so I can well imagine they could emerge out of a human," Noller told Live Science. However, a seed doesn't have to come from a dead person's stomach; it could also grow out of any part of a dead person's digestive tract, such as the small or large intestine, he said.

Even a seed in a dead person's pocket or a seed in the general burial area could gather nutrients from a decaying body, he said. (Specifically, microscopic fungal networks in the soil break down fats and proteins in decaying organisms. Then, in a symbiotic relationship, the fungus gives these nutrients to plants in exchange for simple sugars, Live Science previously reported.)

The fact that seeds can flourish alongside decomposing bodies isn't a new idea, either. For instance, the Wampanoag Native Americans taught the Pilgrims how to fertilize corn seeds with fish meal, according to Plymouth Plantation.

In addition, researchers found the remains of a medieval skeleton tangled up in the roots of an old beech tree that had toppled over in Ireland in 2015, Live Science previously reported.

In the case of the Cyprus murder, several news sources reported that Ahmet Hergune was killed in 1974, during the conflict between Greek and Turkish Cypriots. Hergune and two other people were taken to a cave, where they were killed in a dynamite blast, the story goes. Then, according to the news sources, the dynamite blew a hole in the cave, allowing light to enter and the fig seed in Hergune's stomach to take root and grow.

Later, a researcher reportedly found the fig tree in the cave, and, when he investigated the curious placement of the tree, found the decayed remains of the victims.

But large chunks of this story appear to be false. In reality, the Committee on Missing Persons, which reunites families with the remains of individuals who went missing during the 1963-64 and 1974 conflicts on Cyprus, received a tip in 2006 that three deceased people were buried in a cave by the sea.

There was a fig tree growing in the cave, but it was not growing out of any of the human remains, according to the Cyprus Mail.

However, perhaps to help them deal with the death of their loved one, some members of Hergune's family began saying that the fig tree had grown out of his body, the Cyprus Mail reported.

"It helped them with finding closure," sources close to the Committee on Missing Persons told the Cyprus Mail.